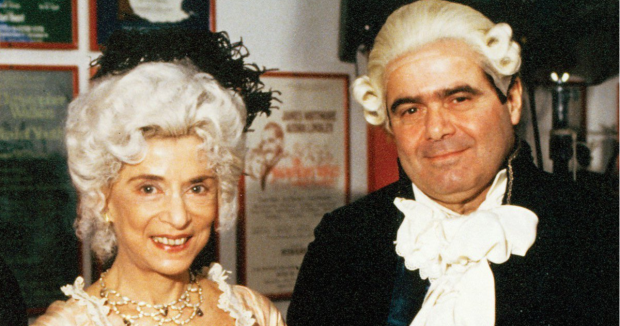 “They liked to fight things out in good spirit — in fair spirit — not the way we see debates these days on television.” — NPR’s Nina Totenberg

The friendship between Supreme Court icons Ruth Bader Ginsburg and Antonin Scalia seemed quite impossible.  Among other things, the two bonded over their love of opera — but theirs was a relationship built on so much more — they laughed together, traveled together, and shared real mutual respect.  This, despite serious and deep disagreement.

Had Scalia been a justice when Ginsburg was arguing women’s rights cases before the court throughout the 1970s, he certainly would have voted against her. He wrote the solo dissent to her first majority opinion in U.S. v. Virginia, the opinion that ended women’s exclusion from the Virginia Military Institute, and formed the capstone of her lifelong fight for gender equality. “This is not the interpretation of a Constitution,” Scalia complained, “but the creation of one.” Scalia bitterly opposed the Supreme Court’s gradual recognition of rights for gays and lesbians; Ginsburg was the first justice to preside over a same-sex marriage. Scalia referred to the Voting Rights Act, the law protecting ballot access for the historically disenfranchised, as one of several “racial entitlements” that Congress would be hard-pressed to end; Ginsburg ferociously dissented when the court gutted it.

Whether or not it was how Scalia saw it, for Ginsburg their friendship also made a statement about the court as an institution: that it was strengthened by respectful debate, that it could work no matter how polarized its members were.

Call us the odd couple. She likes opera, and she’s a very nice person. What’s not to like, except her views on the law? — Scalia, on his friendship with Ginsburg

David Savage describes the relationship in the Los Angeles Times: "He's brash and burly and believes in strict adherence to the Constitution's original text. She's soft-spoken and slight and believes in a "living Constitution" that can change with the times. On controversial cases, they were often most likely of any pairing of the nine Supreme Court justices to disagree."

Their areas of agreement may be few, but they maintain a tone of respect. This most odd couple of all odd couples relationship even inspired a comic opera, composed by Derrick Wang: Scalia/Ginsburg: A (Gentle) Parody of Operatic Proportions.

Their friendship, Blatt said, was based on mutual respect and common interests that transcended their ideological differences. Again, from The Times:

"If I could choose the talent I would most like to have, it would be a glorious voice. I would be a great diva, perhaps Renata Tebaldi or Beverly Sills," she wrote in a foreword to the opera. "But my grade school music teacher, with brutal honesty, rated me a sparrow, not a robin."

As usual, Scalia sees opera a bit differently, too. "I could have been a contendah — for a divus, or whatever a male diva is called," he wrote in response. He said he has sung in choral groups and once "joined the two tenors from the Washington Opera singing various songs at the piano.... I suppose, however, it would be too much to expect the author of 'Scalia/Ginsburg' to allow me to play (sing) myself. Even so, it may be a good show."

Ginsburg admitted once that Scalia made her better. One night last year when the two justices appeared onstage for an interview together in Washington, D.C., Ginsburg talked about a time when Scalia showed her his dissenting opinion in a case before she had finished the majority opinion. "I took this dissent, this very spicy dissent and it absolutely ruined my weekend," Ginsburg said. She made some tweaks to her own argument.

Ginsburg noted the performance in the statement she released to honor Scalia after his passing. (Toward the end of the opera Scalia/Ginsburg, tenor Scalia and soprano Ginsburg sing a duet):

"We are different, we are one," different in our interpretation of written texts, one in our reverence for the Constitution and the institution we serve. From our years together at the D.C. Circuit, we were best buddies. We disagreed now and then, but when I wrote for the Court and received a Scalia dissent, the opinion ultimately released was notably better than my initial circulation. Justice Scalia nailed all the weak spots — the "applesauce" and "argle bargle" — and gave me just what I needed to strengthen the majority opinion. He was a jurist of captivating brilliance and wit, with a rare talent to make even the most sober judge laugh. The press referred to his "energetic fervor," "astringent intellect," "peppery prose," "acumen," and "affability," all apt descriptions. He was eminently quotable, his pungent opinions so clearly stated that his words never slipped from the reader's grasp.

Justice Scalia once described as the peak of his days on the bench an evening at the Opera Ball when he joined two Washington National Opera tenors at the piano for a medley of songs. He called it the famous Three Tenors performance. He was, indeed, a magnificent performer. It was my great good fortune to have known him as working colleague and treasured friend.

Sometimes, she said, she had to pinch herself to not laugh in the courtroom when Scalia said something audacious.

“If you can’t disagree ardently with your colleagues about some issues of law and yet personally still be friends, get another job, for Pete’s sake,” is how Scalia once described their lifetime appointments.

Respect + Rebellion stories are written by colleagues (and now real-life friends) Dr. Jacob Hess (Right bias) and Liz Joyner (Lean Left bias). Jacob is the author of "You're Not as Crazy as I Thought (But You're Still Wrong) Conversations between a Devoted Conservative and a Die-Hard Liberal" and editor of Public Square Magazine. Liz is the Founder & President of The Village Square, a unique community-based model to heal the political divide.

This piece was reviewed and edited by managing editor Henry A. Brechter (Center bias).