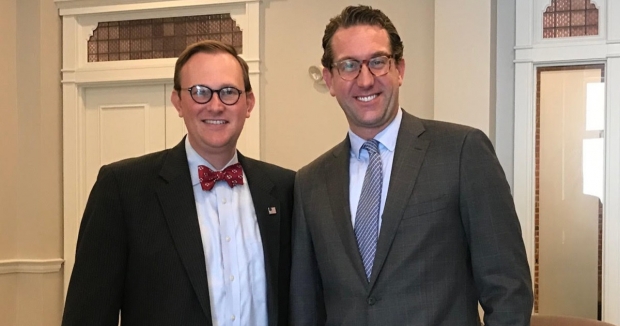 Note: We’re expanding our “Our Couples” series to include stories of regular Americans with unexpected friendship stories (some even take speaking gigs). This piece was originally created by The Village Square and published on respectandrebellion.com.

How would you feel about meeting the guy who prosecutes one of your good friends in court? Ready to invite him for a beer?

When Allen & Ashby found themselves on different sides of the high-profile trial of former Chief Justice Roy Moore in Alabama, that’s what ended up (eventually) happening.

Moore (then Allen's boss) is the controversial former Alabama Supreme Court Justice who erected a Ten Commandments monument at the Alabama Judicial Building. Moore was ultimately suspended for having defied the U.S. Supreme Court decision legalizing gay marriage. (He was the 2017 Republican nominee for the U.S. Senate.)

If you’d like to find out more about why that beer came about - and what came afterward between them (and why it matters for America today), well, you’ll have to ask them when they visit! Just don't get them talking about Alabama v. Auburn, it's the one topic on which they refuse to see each other's point of view (things could get ugly).

Ashby Pate is a Writer, Advocate, Musician, Skeptic, Humanist, Freethinker, Husband, Father & Devoted Friend. Allen on Ashby. Ashby is ambitious but humble, confident but considerate, professional but laid-back. He is a down-to-earth, fun-loving lawyer who is easy to like and energizing to be around. Ashby’s also an inspiring rock star who finds himself working as a lawyer by day, as well as being a caring father who’s rightly proud of his two daughters. He’s willing to dialogue with anyone, especially over a good beer. We have that in common. I like him very much.

Ashby on Allen: For someone espousing such a surplus of wrong-headed ideas, Allen remains charming, civil, infinitely decent, and reasonable. He is accomplished, lettered, and highly intelligent, the kind of well-dressed and well-mannered southern intellectual I always hoped I’d become (if I hadn’t been hamstrung by gruff skepticism, a disdain for neckwear, and a fondness for beer). Above all, Allen is a man of goodwill, devoted to honest and fair-minded truth-seeking. I like him very much.

Ashby and Allen personally met as participants in the Alabama State Bar Leadership Forum, a six-month educational program for young attorneys, but that wasn’t when they first saw each other. When they first saw each other, Ashby was standing behind a podium in the Alabama Supreme Court as he prosecuted Chief Justice Roy Moore, known as the “Ten Commandments Judge,” who had been Allen’s boss for the last three years. (Nice way to spark up a friendship, right?!)

Yes, while Allen was sitting behind the Chief Justice, watching history unfold, he couldn’t have known then that the man who was prosecuting his friend and former boss, the Chief Justice, would also become another friend two years later. Although they believe their views are too complex for simplistic labels or categories, Allen and Ashby might reasonably be classified as thinkers on the right (Allen) and the left (Ashby). Their political differences were the discussion points that led to their friendship.

As an example of the nuance between them, Allen summarizes, “As a student of Hume, Hayek, Burke, Oakeshott, and Kirk, I share Ashby’s skeptical stance, while also being a Christian myself. We are just skeptical about different things, me chiefly about ideology, abstraction, rationalism, and the capacity of human reason - things Ashby may also question.”

Find Allen and Ashby’s story at Respect + Rebellion, and contact them for speaking gigs.