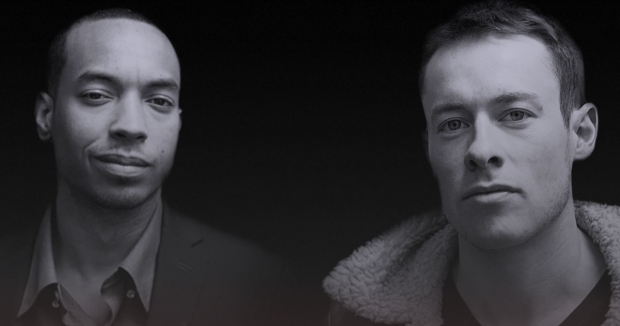 “They are not enemies but friends,” but boy, do they disagree. This is a friendship all about appreciating differences — and helping other people to do the same through their leadership in Braver Angels, a national initiative to depolarize America.

Contact us if you’ve got your own Odd Couple story to share. Note: We’re expanding our “Our Couples” series to include stories of regular Americans with unexpected friendship stories (some even take speaking gigs). This piece was originally created by The Village Square and published on respectandrebellion.com.

When you see a warm fuzzy story about a "left right" friendship, it's easy to think, "well, of course - anyone could do that if they're both moderate enough." But what about people who are deeply passionate enough about their politics to have gone all in?

John Wood was Vice-Chairman of the Republican Party of Los Angeles County, running in 2012 for Congress against incumbent Maxine Waters. He's a social conservative who supports an active church, views capitalism as the antidote to poverty and is working to reform the conservative movement. And Ciaran O’Connor was a campaign staffer for Barack Obama and in 2014 and Hillary Clinton in 2016 - and is a liberal who believes in an active government, supports progressive social causes and Democratic campaigns. These guys really disagree on big things that matter.

Now friends, they met as early leaders in a political movement called Better Angels, a name plucked from Abraham Lincoln's first inaugural address: “We are not enemies, but friends. We must not be enemies. Though passion may have strained, it must not break our bonds of affection. The mystic chords of memory will swell when again touched, as surely they will be, by the better angels of our nature."

We're looking forward to a day when John and Ciaran will be involved in a good old-fashioned political brawl on the floor of Congress (after which, they will grab a beer like political opponents were accustomed to doing in days of yore), but for now they're on the same side of a different kind of political fight - one that aims squarely at making respectful disagreement cool again. Something tells us this duo might just win it. Listen to Ciaran and John chat it up on the Braver Angels Media podcast. Oh and they can sing (here, riffing Hamilton The Musical).

John on Ciaran: "Ciaran is the coolest dude I know. He’s sharp as a tack, doesn’t judge others and is always making me answer for the crazy things other Republicans do (that last part can be a little annoying, but, oh well). Ciaran cares about people, regardless of their politics. Everything he does he does to make this country a better place for everyone."

Ciaran on John: "John is that dude. A 1981 Benz Driving Black Republican with Intellect for Days and a Dose of Swag when you need it. The man can speak, sing, write. He is kind and smart. Confident yet humble. A true Braver Angel."

Though they are on opposite sides politically, after the ugliness of 2016, John and Ciaran both believed that somebody needed to step up and start bringing Americans together. Enter: David Blankenhorn and Braver Angels!

We are not enemies, but friends. We must not be enemies. Though passion may have strained, it must not break our bonds of affection. The mystic chords of memory will swell when again touched, as surely they will be, by the better angels of our nature. — Abraham Lincoln, 1861

Ciaran joined Braver Angels in 2017; later that year, a friend contacted John thinking he'd be interested in the same project. As John writes, "It turned out that even though our politics were different, Ciaran and I saw the problem of division in America exactly the same way." When John joined the Braver Angels project, Ciaran moved from Brooklyn to Los Angeles so they could work together and the rest, as they say, is history.

Over the last few years, they've subsequently done many workshops across the country, inviting people on the left and right to find the same affection, respect and understanding as they have for each other.

They give a talk together: "Collaborative Competition: How We Can Compete Politically while Working Together." Theme: Working for Unity while Staying True to Yourself. Ciaran and John use their own friendship to illustrate the possibilities for bridging division in front of any one of us right now. As reflected above, the differences between these two are substantial. Yet somehow they don’t have to disguise their views from each other to get along. In fact, they don’t even have to change their positions to find common ground.

Find John + Ciaran’s story at Respect + Rebellion, and contact them for speaking gigs.