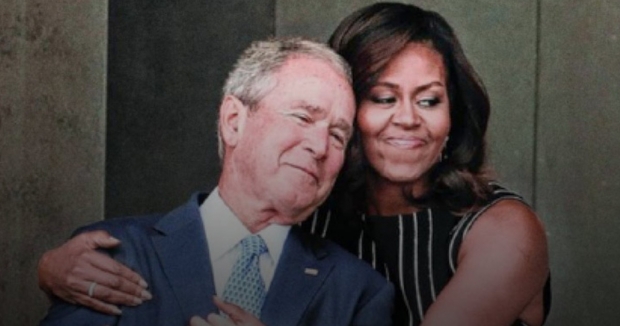 “I’m kind of a needler, and she handles it pretty well.”

Theirs isn't a story of political foes taking on the biggest, hardest, deepest divisions of our time. It's the opposite. And in their story is a lesson of our time.

The bond between this political odd couple dates back to the inauguration of President Barack Obama in January 2009. President Bush took time to talk with Mrs. Obama and meet her two daughters, Sasha and Malia, during President Obama's swearing-in ceremony.

What is on its surface just a small act of recognition of common humanity is so much more if we remember context — it occurred in the middle of the tumult of a political change of power, a delicate and complex endeavor to maintain social order that more often in human history hasn't necessarily gone particularly well. It was, in fact, an evolution in the early years of American democracy in particular that we began thinking of political foes as anything other than the enemy to be destroyed. This tradition of social kindness lays the very foundation under a stable democracy. "It's a beautiful experience to watch the peaceful transfer of power," President Bush said of the day, despite the fact that his candidate lost.

"[The friendship] surprised everybody. That's what's so weird about society today, that people on opposite sides of the political spectrum can actually like each other."--- President George W. Bush

From that small little seed, their affection grew.

Ripples form around relationships like this. Michelle's warm hug at the dedication of the Smithsonian National Museum of African American History and Culture became fresh and different in a culture where relationships like this don't seem to exist. But it said so much more than that - where our two parties disagree so fundamentally on matters related to people of color, her affection said "we can disagree about these deep and profound issues and still see - even still enjoy - each other."

In the same way that silos form barriers that become battle lines, stretching out past barriers creates new openings through which new opportunities to understand naturally flow — what starts as trickles can become streams and then rivers. The relationship between them was the subject of an Ellen DeGeneres Show appearance by 43, during which Ellen's audience got to share more laughter with Bush than the average Ellen watcher likely has had an opportunity to experience previously. Laughter opens hearts that once opened want to stay that way - there's even lots of evidence that liberals are shifting their opinion on Bush these days. It’s hard to guesstimate where these ripples begin and end, but we're going to need a lot of them to turn the fury around.

There's actually science behind this - humor is a form of muscular bonding, where two or more humans "move" together, mirror each other in an act of synchronicity. We humans seek out this kind of bonding - if we don't find it in a constructive outlet like humor, a devotion to a higher cause or the simple act of rooting on our favorite football team then we risk finding it in destructive negative ways. Laughter binds people together. Once we are friends, we can navigate - even revel in disagreement.

While they do share a passion for service to U.S. military veterans, they'll likely never agree on much (if anything) else — and it's pretty likely they'll never even talk about it long enough to find out. But let's hope they just keep laughing.

That can be everything.