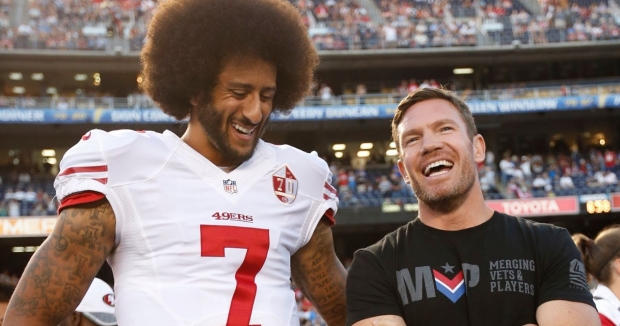 “I look forward to the day you’re inspired to once again stand during our national anthem. I’ll be standing right there next to you.”

Note: This piece was originally created by The Village Square and published on respectandrebellion.com. It is republished here with permission.

Sometimes progress in navigating deep and emotional conflict is measured in small gestures toward understanding — gestures that are not in themselves even close to achieving a state of understanding. Sometimes a little movement is the best we can achieve, especially at times when movement is ground both hard won and hard conceded.

That's the story of what happened between NFL players Colin Kaepernick and former Seahawks player and Green Beret Nate Boyer.

It's important to understand the righteous causes that people on opposite sides of this conflict are fighting for. With phones in so many pockets across America, we are just now beginning to see with our own eyes what black Americans have experienced for their whole lives. Patience to right these wrongs is growing thin and succumbing to what King called "the fierce urgency of now." People of good will are moved to do something. From the other perspective, the something that Kap chose to act on seems a deep betrayal of a country that has given him the right to achieve so much, and at great sacrifice by so many. Joey Jones, a vet who lost both legs in combat made that point in this tweet:

Hey @Kaepernick7 I don't have legs but I'll stand w/ enough pride for both of us every time my National Anthem plays pic.twitter.com/q1EEGnmD7M — Joey Jones (@Johnny_Joey) August 27, 2016

Boyer, a 49er fan from childhood, took a different tack when he wrote an open letter to Kaepernick in The Army Times - a letter that should be required reading for any American who has followed this story (and most certainly for anyone who wants to write, talk, post or certainly tweet about it).

"In 2004, I witnessed genocide firsthand in the Darfur region of Sudan. The fact that hate and oppression still exist at that level in our world really hurts me. I met countless young Africans who were enamored with America and the opportunities that exist here. Those people would have given anything to experience what I had grown up with, even just for one day. I joined the Army upon returning to the U.S. because I believed people like that were worth fighting for. De Oppresso Liber ("To Free the Oppressed") is the Army Special Forces motto, and the reason I wanted to become a Green Beret."

Boyer expressed empathy for Kaepernick's cause here at home and a profound humility that he cannot ever understand what it is to be a black man, even as he was clear that his initial reaction to Kap's protest was one of anger. He continues - "I’m not judging you for standing up for what you believe in..."

"I look forward to the day you're inspired to once again stand during our national anthem. I'll be standing right there next to you. Keep on trying … De Oppresso Liber." -- Nate Boyer to Colin Kaepernick

Kaepernick's response to Boyer flowed directly from Boyer's evident humility. Kap took the initiative to reach out and even paid for an Uber to drive Boyer 120 miles to be together ahead of a game.

Kap expressed to Boyer "I want you to know, first and foremost, I really do respect the heck out of the military, and I really want to thank you for your service. I just want you to know that."

The conversation led to Kaepernick's better understanding of the struggles of veterans returning from service. "As we had that conversation, those are discussions that this country needs to have," Kaepernick said. "While I was talking to him, he mentioned 22 military vets a day commit suicide, but this country will let those vets go and fight the war for them, but when they come back, they won’t do anything to try to help them. That’s another issue. And these issues need to be addressed."

During their conversation Boyer showed Kap a heartfelt and honest message from a fellow Green Beret sent over a flag-draped coffin in which he expressed his rage that Kap could take for granted the freedoms the sacrifice was for. Kap then asked "How can I show respect to people like that, but still get my message across that I’m not satisfied with the way things are going in this country?"

Their conversation led to a compromise of sorts, a readjustment of Kap's protest position from sitting to kneeling. Although in the din of the tragic and escalating fury between us, it may seem a subtle point, perhaps it's everything. It's a small gesture of movement toward the other. Boyer wrote about his suggestion to Kap that he take a knee:

"[Kneeling is] still definitely a symbol. People take a knee to pray. In the military, we take a knee all the time. It’s one of the things we do. When we’re exhausted on patrol, they say take a knee and face out. So we take a knee like that. We’ll take a knee as the classic symbol of respect in front of a brother’s grave site, a soldier on a knee."

Kap asked Boyer if he'd take a knee with him, though Boyer declined. "Look, I'll stand next to you. I gotta stand though. I gotta stand with my hand on my heart."

Boyer wrote of their intention to continue and widen the conversation: "You’ve got myself, you’ve got Joey [the vet who lost his legs who tweeted], you’ve got Colin, you’ve got Eric and countless other people on both sides of the spectrum that I’m sure would be interested in continuing discussions and trying to involve as many people from both parties as we could and find something, whether it’s some sort of change in policy or at least bridging these gaps in communication," Boyer said. "Maybe what Colin is doing, as off-putting as it may be to a lot of people, maybe it’s exactly what we needed to happen to move forward."

Years before this conflict, Boyer's dad was a high bidder for a football signed by Kap. It says "God Bless Our Troops." Though deeply challenging, perhaps conversations that start like that deserve our patience and perseverance to see that they continue. The authenticity with which both of these men expressed their hearts and the humility with which they approached each other is a high bar we should - at least - seek to follow.

Read more on their story here and here.

We like the traits of humility + authenticity so much when embraced together that we made t-shirts to help inspire you to walk the walk. Every little toehold helps in a long uphill climb, plus a person's got to look good while they're climbing.) — The Village Square’s Respect + Rebellion