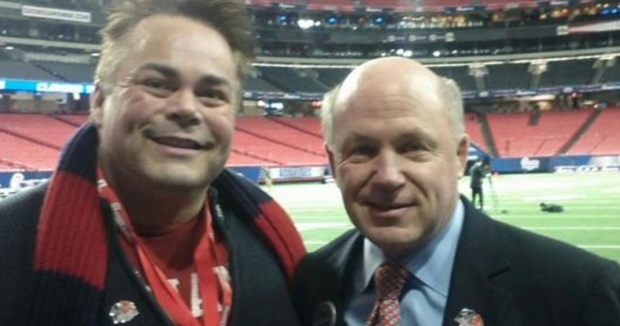 As the Culture War accelerated to include the truly transcendent battle ground of fighting over chicken sandwiches, two participants in said Culture War called an audible – they spoke to each other. This was so gobsmackingly rare that it actually made the news in 2012 (and 2013, 2014, etc, and on into ever increasingly exhausting perpetuity).

This Odd Couple’s story begins after Dan Cathy, the CEO of Chick-fil-A gave an interview expressing his opposition to same-sex marriage:

“I think we are inviting God’s judgment on our nation when we shake our fist at Him and say, ‘We know better than you as to what constitutes a marriage. I pray God’s mercy on our generation that has such a prideful, arrogant attitude to think that we have the audacity to define what marriage is about.”

LGBT campus advocacy group Campus Pride became a part of a resulting boycott. This was a real disagreement with deep and consequential stakes – these differences aren’t superficial and shouldn’t be treated lightly, and the disagreement shouldn’t be stifled.

Rather than fighting battles in the courts, legislatures, and public square, we ought to begin by loving our neighbors and establishing genuine friendships.” -Url Scaramanga

Things naturally accelerated from there (because everything always accelerates from there, anywhere that there is). Here’s where this story diverges from the usual – Cathy did something ridiculous – he picked up a telephone (cool invention of a Mr. Alexander Graham Bell, you can talk to people directly through it) and called Shane Windmeyer, the leader of Campus Pride. Then they actually talked. They even hung out together. Windmeyer has written about it:

"Through all this, Dan and I shared respectful, enduring communication and built trust," Windmeyer said. "His demeanor has always been one of kindness and openness. Even when I continued to directly question his public actions and the funding decisions, Dan embraced the opportunity to have dialogue and hear my perspective."

Has anything changed as a result of this feathered brouhaha, this disagreement that started out Udderly Most Fowl? [Email more chicken puns here. ] Maybe. Since then Chick-fil-A has signaled it “wants to evolve from a place where gays once picketed to a place where they’ll feel comfortable going to eat.”

Is anyone’s opinion on gay marriage different? Likely not. Shane reflected on this:

"Dan expressed regret and genuine sadness when he heard of people being treated unkindly in the name of Chick-fil-A — but he offered no apologies for his genuine beliefs about marriage," Windmeyer said. "And in that we had great commonality: We were each entirely ourselves."

The disagreement will assuredly continue – there will be more high points and then there will be low points we’ll have to work around. (No, Dan Cathy never said “We Don’t Like the Blacks Either.”)

Maybe that’s OK and we can just enjoy living in a country where we’re free to either Eat Mor Chikn. Or not. Maybe something so much bigger happened in this one story – two people on opposites sides of our cold civil war got to see each other as human beings. And that’s, we think, is certainly something to squawk about. Or should it be “moo about?”

Respect + Rebellion stories are written by colleagues (and now real-life friends) Dr. Jacob Hess (Right bias) and Liz Joyner (Lean Left bias). Jacob is the author of "You're Not as Crazy as I Thought (But You're Still Wrong) Conversations between a Devoted Conservative and a Die-Hard Liberal" and editor of Public Square Magazine. Liz is the Founder & President of The Village Square, a unique community-based model to heal the political divide.

This piece was reviewed and edited by managing editor Henry A. Brechter (Center bias).