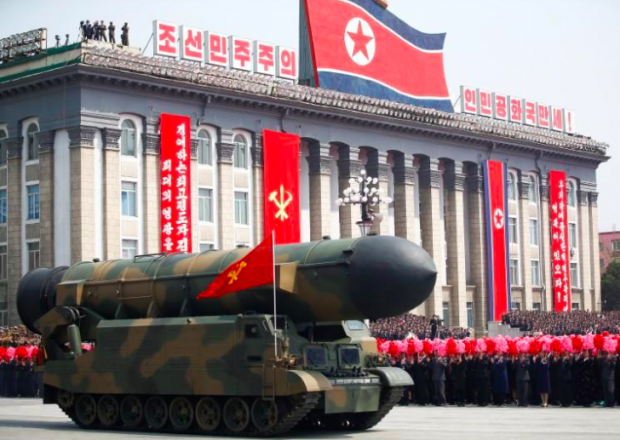 North Korea announced that it would cease nuclear testing indefinitely as Kim Jong-Un travels to meet with South Korean President Moon Jae-in. Experts are divided on whether or not this actually signals openness to disarming. The news coincided with French President Emmanuel Macron's U.S. visit, who hopes that President Trump's meeting with Jong-Un will buy time for the Iran Deal. Mike Pompeo was also confirmed as Secretary of State on Thursday, and his confirmation hearing consisted of several questions pertaining to his direct involvement in the Trump administration's efforts on North Korea.
Take a look at some other big stories this week: Macron Challenges "America First" Nationalism, Senate Committee Approves the Nomination of Mike Pompeo, and Federal Judge Orders Trump Admin to Resume DACA.
Snippets from the Center
North Korea's pledge to dismantle nuclear site sounds good, but verification will be tough
Reuters
"North Korea’s pledge to dismantle its Punggye-ri nuclear test site sounds like a big step forward but verifying whether that will actually happen will be difficult, underlining the complexities of any deal it may strike with the United States.
...
Pyongyang’s declaration on Saturday said it no longer needed to conduct tests because the country had reached its weapons development goals.
Essentially, experts said, it was stating that it had become a full-fledged nuclear power."
Snippets from the Left
From brink of war to hopes of peace: Kim Jong Un heads south for summit
CNN
"For the first time in over a decade, the leaders of a divided Korea will sit down Friday to negotiate an end to a decades-long rivalry which has threatened at times to plunge the world into nuclear war.
...
Speaking to CNN Thursday, South Korean Foreign Minister Kang Kyung-wha said Trump deserved the credit for bringing North Korea to the negotiating table for the first time in years. 'He's been determined to come to grips with this from day one,' Kang said.
...
Evans Revere, former State Department expert on North Korea, told CNN the most important outcome of Friday's talks would be whether or not Pyongyang was serious about dismantling its nuclear arsenal.
...
Revere said he was one of the 'many skeptics' who were not holding their breath for many concessions by North Korea on their nuclear program."
Snippets from the Right
Why North Korea Isn’t Going to Give Up Its Nukes
National Review
"In this case, letting Trump be Trump has yielded real diplomatic results that would likely be hailed as 'breakthroughs' under, say, a President Hillary Clinton.
The problem is that these diplomatic triumphs are almost certainly meaningless or even dangerous — something that many Trump supporters would be saying right now if Hillary Clinton were president.
Put simply: North Korea is not a normal country. It’s not even a normal dictatorship. It is essentially a totalitarian monarchy whose dynastic rulers claim divine origins.
...
Contrary to a lot of the White House talking points, Kim’s trial balloon about 'denuclearizing' doesn’t mean he’s open to disarming. It’s 30-year-old jargon for getting America to abandon the South Koreans, paving the way for unification on the North’s bloody terms."
Discover more on this topic on AllSides.
North Korea, Denuclearization, Kim Jong Un, Emmanuel Macron, Mike Pompeo, Story Of The Week, News