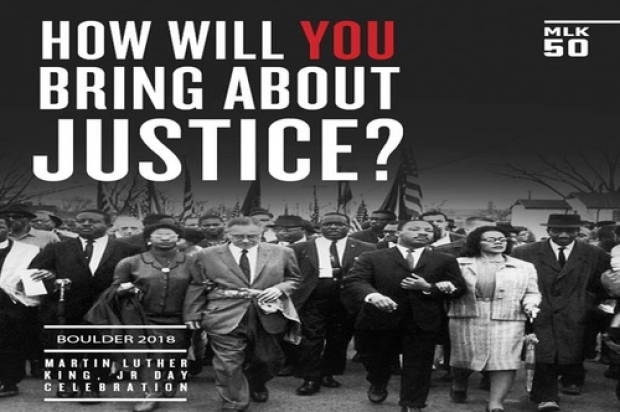 As I sat in the front row of Second Baptist Church of Boulder, Colorado waiting to be called up to join my fellow panelists, I found myself wondering what Rev. Dr. Martin Luther King Jr. would think of this moment. On this Saturday morning, some fifty years after he was assassinated, members of two of the most historic congregations in town—one largely African American, the other largely with members of European descent—along with other citizens of this community, gathered together to both honor the legacy of Dr. King and to discuss race and power in our modern context as a part of our city’s MLK Celebration Weekend.

My first thought was that perhaps Dr. King would feel disconcerted. “I cannot believe they are still talking about this,” I imagined him thinking. But then, I thought that perhaps he would rather say, “Well, if they haven’t gotten to The Promised Land yet, at least they’re still on the journey.”

As I listened to the storyteller, who opened our time together by sharing the tale of her grandmother who encouraged her son to get educated after an accident made keeping him in the fields untenable, I felt deeply how far we have come as a nation and how much further we must go in order to make manifest the perfect union we profess to desire. Tears streaming down my face as I listened to how her father was treated by the racist landowner for whom her family worked, I began wrestling with the feelings of both gratitude and concern about this situation I created for myself. Here I was living a dream—to have members of these two churches together discussing matters that I believe are of critical importance to the future of our city and this nation—and yet, I was concerned that if I were too honest about my thoughts on race and power, I might inadvertently spoil any chance of a future gathering of our communities.

One of the concerns, I’ve come across as a volunteer with Living Room Conversations is that some people are leery about inviting people who they care about, but with whom they might have differences of opinions, into certain conversations because they fear they might make things worse rather than better. And I think that is what I was considering as we prepared for our community conversation. What if in being honest about my thoughts on race and power, I caused our congregations to feel like we were further from each other than I believe we are? Or worse yet, what if I said something to make both communities feel like they wanted to distance themselves from me? I think this is a very natural concern for people who find themselves somewhere in the middle when it comes to hot button topics—a place I often reside.

Both of these churches are very dear to my heart. First Congregational because I am one of their ministers and Second Baptist because their very presence in the city ministers to the part of me that has so intimately informed how I show up in the world—my blackness. Both churches are pillars in the community. First Congregational is the oldest and likely the most liberal of the Christian churches in Boulder. Second Baptist is the oldest church with a predominantly African American congregation in the city. From what I have been told, years ago the congregations used to have Vacation Bible School together. But, as their theological trajectories seemed to veer from one another, so did their interactions. Until eventually, very few people remembered the last time they did anything together.

Isolation is one of the hallmark survival strategies. When people feel threatened for whatever reason, situational predictability becomes increasingly important and as a result we instinctually decrease exposure to variety and rely on routine as a substitute for security. This is evident with individuals and organizations alike. Hence you have people who feel threatened creating community around mutual fear and angst. In my opinion, houses of worship should be the last places that this should happen. And speaking particularly for the Christian tradition out of which I emerge, I feel that isolation is the last thing we should ever do. And yet churches are comprised of people who often place a premium on safety.

As a black man in a context of nearly all white people, I am often asked about how safe I feel or how I am able to stay engaged. The answer is complex. Often, I get tired of translating. To go into the depths of my being in order to be authentic with people who cannot intimately relate to my experience can be draining. And to do so while acknowledging my right to be angry and disappointed in this society, while simultaneously choosing not to take my anger out on others is painful. But, the knowledge that people like Dr. King marched, were imprisoned, and were killed so that I could have these conversations keeps me engaged—sometime even when I don’t want to be.

In my study of the Christian religion and the teacher who inspired it, I came to respect just how much of Jesus’ work was punctuated by his willingness to visit, eat with, and even compassionately touch people outside of his community—to include those seen as the enemies of his people, the unclean according to his own religion, and even people considered to be the lowest of his society.

From my point of view, trying to follow his teachings—those same teaching that inspired Dr. King—means that I must always push myself to do the same border-crossing work he did even if it feels uncomfortable to do so. That’s why it is so challenging for me to reconcile the fact that too often, rather than being a place where people can have difficult conversations, many churches have become polarizing institutions in our communities. As Martin Luther King Jr. once said, and unfortunately is often still quite true, “11 AM on a Sunday morning is the most segregated hour in America.” And it seems that we are not only segregated racially, we are segregated economically, ideologically, and politically as well.

However, on this Saturday morning, for a couple of hours, this tendency was dissolved, and possibilities were created. SBC’s Sr. Pastor, James Ray, put together a panel that consisted of people from different racial, gender, generational, and even theological backgrounds who all had “skin in the game” when it came to the subject of race and power in our society. Our moderator, Fred Davis, and member of SBC was thoughtful, challenging, and engaged. The Second Baptist Church community was welcoming and authentic and the members of First Congregational Church Boulder and the other community members were attentive and optimistically curious. What more can anyone ask for when engaging one of the top three “must avoid subjects” in American conversational etiquette?

When our time together ended, we held hands and sang “We Shall Overcome”.  Deep in my heart, I do believe that Dr. King was singing with us. And as we prepared to go our separate ways, I released whatever concerns I came in with, telling myself to always remember that I should never allow the fear of loss to trump the desire for the mutual gain that can be experienced when we dare to open ourselves up to others. Finally, as I was passing between the people in the aisles to get to the fellowship area where our hosts had prepared breakfast for us, I was fortunate enough to witness a young woman from SBC walk over to some people from our church and say something to the effect of, “I’m glad that we did this. I want us all to know each other. Even if we’re different in some ways, there’s really no reason why we don’t know each other.” And I thought to myself that Dr. King would smile at this and say “Isn’t that the truth?”

Pedro Silva served 8 years in the U.S. Air force before answering his call to ministry. In his post-military years, he worked in both for- and non-profit organizations. Compelled to cultivate his passion of helping people, he enrolled at Andover Newton Theological School in Massachusetts in 2009 and in 2013 earned his Master’s in Divinity. After serving four years as student minister in Massachusetts, he came to Colorado. He is ordained through the United Church of Christ. He is also a blogger for The Roofless Church - http://therooflesschurch.com.