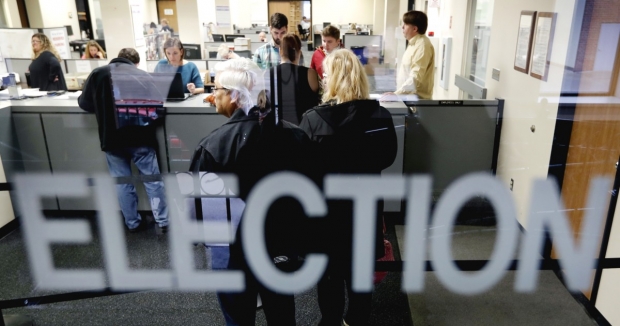 With the Nov. 6 midterm elections approaching, media outlets are analyzing the pivotal factors that will influence many of the tight races across the country and the likely outcomes on Election Day.
Some have criticized President Trump's approach to key issues and say that it will backfire for Republicans, particularly as he ramps up political pressure around illegal immigration and the migrant caravan. And although Democrats are expected to flip the House, some have cast doubt on the idea of a "blue wave," predicting smaller victories for the party than previously anticipated.
Take a look at our latest blog: Media Bias Fuels Political Violence in America. Can We Change? As always, see our media bias ratings to see how your favorite source stands.
And check out some other big stories this week: Trump Considering Executive Order To End Birthright Citizenship, Jair Bolsonaro Wins Presidential Election in Brazil, and Trump Says the 'Fake News Media' Are 'the true Enemy of the People'.
Snippets from the Right
A wave or a whimper? Here's why 2018 doesn’t feel exactly like the last few 'wave' midterm elections
Washington Examiner
"Had the midterm elections been held one year ago, it would have been a disaster for Republicans.
...
And then … it wasn’t. Not completely, anyway. Tax reform passed, and despite countless pundits declaring how unpopular it was, the law grew in popularity once it passed and now sits at roughly even in terms of support and opposition.
...
This is not a prediction of a coming fabulous night for Republicans, at least not in the House of Representatives. If we define a "wave" as being an election where 30 seats or more change hands, that still seems quite likely, as the FiveThirtyEight forecast puts the median expected outcome around 39 seats as of press time.
...
But at least for now, the indicators suggest a shift far less dramatic than the 63 seats Republicans picked up in the 2010 wave. Had the election been held a year ago, we very well could have been looking at that scenario. Today, while it is more likely than not that Republicans will lose control of the House, that we are even able to imagine and discuss a possible scenario where they do retain control is a testament to how things have changed over the last year."
Snippets from the Center
U.S. House within Democrats' grasp, Senate a long shot
Reuters
"After two years of wielding no practical political power in Washington, the Democratic Party faces a strong chance of winning control of the U.S. House of Representatives in next week’s election, with Republicans likely to keep the Senate.
Taking a majority in even one of the chambers in the Nov. 6 elections would give Democrats a chance to more effectively oppose Republican President Donald Trump’s agenda, as well as potentially launch investigations into his administration.
...
Democrats have focused their closing messaging on defending the 2010 Affordable Care Act, popularly known as Obamacare, and its protection of insurance coverage for people with pre-existing conditions.
Republicans have played up the Senate’s recent confirmation of Brett Kavanaugh, Trump’s second nominee to a lifetime seat on the Supreme Court, which cemented a 5-4 conservative majority. Trump has also focused attention on immigration issues, including a caravan of migrants from Central America headed through Mexico toward the U.S. border."
Snippets from the Left
Trump’s Nationalism Is Breaking Point for Some Suburban Voters, Risking G.O.P. Coalition
The New York Times
"If the 2016 election hinged in large part on a rightward shift among working-class whites who deserted Democrats in the presidential race, Tuesday’s House election may turn on an equally significant and opposite force: a generational break with Republicanism among educated, wealthier whites — especially women — who generally like the party’s pro-business policies but recoil from strident, divisive language on race and gender.
Rather than seeking to coax voters like these back into the Republican coalition, Mr. Trump appears to have all but written them off, spending the final days of the campaign delivering a scorching message about preoccupations like birthright citizenship and a migrant “invasion” from Mexico that these voters see through as alarmist.
...
In Republican-leaning districts that include diverse populations or abut cities that do — from bulwarks of Sunbelt conservatism like Houston and Orange County, Calif., to the well-manicured bedroom communities outside Philadelphia and Minneapolis — the party is in danger of losing its House majority next week because Mr. Trump’s racially-tinged nationalism has alienated these voters who once made up a dependable constituency."
Discover more on this topic on AllSides.
Elections, Midterms, Story Of The Week, News