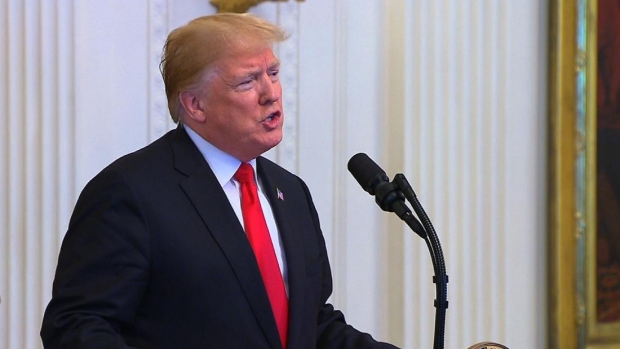 A suspect has been apprehended and charged with sending 13 pipe bombs to prominent Democrats as well as CNN, a crime spree that sparked fervor around the state of incivility in modern-era politics.
Many have said President Trump shares much of the blame, particularly with his history of directing incendiary comments towards his political opponents and the media. Others have called for civility on both sides of the aisle and said that implicating Trump is a double standard when considering recent assaults on Republicans by left-wing activists.
Fund the solution, not the fight: Midterms are approaching, and polarization is at an all-time high. Help us in our work as we try to help heal the political divide.
And check out some other big stories this week: Trump Administration to Send 800 Troops to U.S.-Mexico Border Ahead of Migrant Caravan, Sen. Chuck Grassley Refers Michael Avenatti and Julie Swetnick to DOJ for Criminal Probe, and Trump Administration Considers Legally Defining Sex as Biologically Fixed at Birth.
Snippets from the Left
Having divided us, Trump cannot unite us
CNN Opinion
"In President Donald Trump's brief remarks Wednesday about bombs mailed to prominent Democrats who stand in opposition to him, and to the media organization Trump has repeatedly demonized, he did the least a President could do. Although he used words such as "abhorrent" and "despicable," Trump struggled to sound like a true leader of a nation wracked by political conflict that he has intensified to critical mass.
...
But, given Trump's track record, these words carry little weight. Trump campaigned as a divider with no pretense of uniting the nation. As he vilified the national media, especially CNN, he sought to dehumanize reporters as 'scum,' 'horrible,' and, worst of all, 'enemy of the people.'
During his campaign, Trump wistfully recalled the days when protesters were brought away from events 'on stretchers' and offered to pay legal fees should a supporter attack a dissenter at a Trump rally. Now, he has no standing to call for peace and unity.
...
Trump's rhetoric long ago crossed a line. Now he can never be the leader who can bring us back to where we were before he came along with his diatribes and anger."
Snippets from the Right
After bombing attempts, all must agree that violence and terror have no place in politics
Rep. Steve Scalise (R-LA) for Fox News Opinion
"I was blessed to experience the best of America after surviving a politically motivated assassination attempt while practicing for the Congressional Baseball Game last year.
...
To repeat what I’ve been compelled to say far too often, violence and terror have no place in our politics or anywhere else in our society. Having experienced the effects of political violence firsthand, I am committed to speaking out against it every time it rears its ugly head.
...
Not only is this is a toxic, dangerous way of viewing the world, it is counterproductive to the free exchange of ideas and perspectives that is so vital to the health of this great representative democracy.
If we are to stem the tide of violence and violent rhetoric, then it is crucial we all do our part to break down the divisions in our country and reach out to those with different beliefs than our own."
Snippets from the Center
Trump tones down attacks, calls for civility after devices mailed to Democrats, CNN
USA TODAY
"President Donald Trump on Wednesday implored politicians to stop questioning the moral character of their opponents, using a rally in Wisconsin to call for a more civil politics hours after a series of suspicious packages were sent to high profile Democrats and CNN.
'No nation can succeed that tolerates violence,' Trump said, breaking script from his usually highly partisan rallies to discuss the packages. 'The language of moral condemnation and destructive routine, these are arguments and disagreements that have to stop. Those engaged in the political arena must stop treating political opponents as being morally defective.'
But, Trump put some of the blame for the current political climate on the news media.
'The media also has a responsibility to set a civil tone and to stop the endless hostility and constant negative and oftentimes false attacks and stories,' Trump told the audience. 'They've got to stop.'
...
Trump's career as a conservative politician took off when he demanded Obama's birth certificate and helped spread a conspiracy that the president was not born in America. He's continued the attacks, blaming the country's issues on the former president, including that Obama 'founded' ISIS.
...
Trump, before signing opioid abuse legislation during a ceremony at the White House, pledged to 'get to the bottom' of who sent the packages and why. He also had a message of unity.
'I just want to tell you that, in these times, we have to unify,' Trump said. 'We have to come together and send one very clear, strong, unmistakable message that acts or threats of political violence of any kind have no place in the United States of America.'"
Discover more on this topic on AllSides.
Polarization, Civility, Donald Trump, Story Of The Week, News