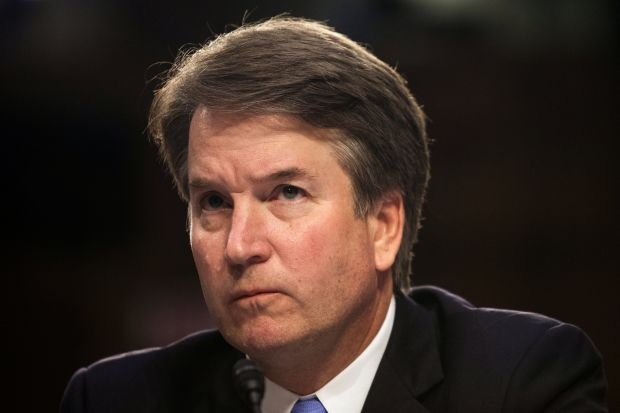 Senators have officially delayed the confirmation vote for Supreme Court nominee Brett Kavanaugh amid the sexual assault allegations against him, reigniting debate over the merits of the #MeToo movement. Some contend the 36-year-old accusation is unsubstantiated and politically motivated, meant to derail the conservative judge from taking a place on the high court. Others say it must be fully investigated before Kavanaugh potentially receives a lifetime appointment, as a credible allegation would put his honesty under scrutiny.
Check out some other big stories this week: Supreme Court Orders Conservative Political Group to Disclose Donors, China Imposes Another $60 Billion in Tariffs, and Trump Orders Declassification of Documents Related to Russia Probe.
Snippets from the Right
The #MeToo Kavanaugh Ambush
Wall Street Journal Editorial Board
"This is simply too distant and uncorroborated a story to warrant a new hearing or to delay a vote. We’ve heard from all three principals, and there are no other witnesses to call. Democrats will use Monday’s hearing as a political spectacle to coax Mr. Kavanaugh into looking defensive or angry, and to portray Republicans as anti-women. Odds are it will be a circus.
...
The role of Senator Dianne Feinstein is also highly irregular and transparently political. The ranking Democrat on the Judiciary Committee knew about Ms. Ford’s accusations in late July or early August yet kept quiet. If she took it seriously, she had multiple opportunities to ask Judge Kavanaugh or have committee staff interview the principals. But in that event the details would have been vetted and Senators would have had time to assess their credibility.
...
No one, including Donald Trump, needs to attack Ms. Ford. She believes what she believes. This is not he said-she said. This is a case of an alleged teenage encounter, partially recalled 30 years later without corroboration, and brought forward to ruin Mr. Kavanaugh’s reputation for partisan purposes.
Snippets from the Left
What The Wall Street Journal gets dead wrong about Christine Blasey Ford and Brett Kavanaugh
CNN Opinion
"The problem with the editorial (or I should say, the main problem, because there are several — which I'll lay out later) is this: It makes the argument for less transparency, less disclosure, less light. We can't know who is telling the truth here, so we can't possibly try, is the underlying argument. This is never an acceptable argument when dealing with allegations of sexual assault of the sort Ford is making. That's particularly true given the stakes here. We are talking about a lifetime appointment for Kavanaugh to the highest and most influential court in the country.
...
The WSJ editorial board views the timing of Ford's accusations as clearly politically motivated and therefore, not worth paying serious attention to. While there's little question that we are very late in Kavanaugh's confirmation process, Ford sent a letter to Democratic California Sen. Dianne Feinstein, and anonymously tipped off the Post, back in July.
...
The Journal editorial isn't totally wrong. It is likely that the hearing will be an absolute circus. And that we won't likely get the unvarnished truth of what happened at that party in the 1980s. But Ford knew all of that. And yet, she decided she was willing to come forward and tell her story. The least we can do is hear what she has to say — and how Kavanaugh responds."
Snippets from the Center
Kavanaugh allegations: Is what someone does at age 17 relevant?
USA TODAY
"Supreme Court nominee Brett Kavanaugh's alleged actions at a 1982 house party invited the nation to expound on the relevance of youthful indiscretion.
...
Fox News commentator Stephen Miller likened it to 'drunk teenagers playing seven minutes of heaven.'
But experts say an assault like the one described by Christine Blasey Ford falls clearly outside the lines of behavior that can be written off as a youthful indiscretion. Ford claims that Kavanaugh pinned her to a bed, groped her, tried to remove her clothes and put his hand over her mouth. Kavanaugh denies the allegations.
...
Teenage antics are usually 'calibrated not to hurt people,' said Sherry Hamby, a psychology professor at the University of the South. But if a boy covers the mouth of a girl to drown out her screams, 'it's pretty clear that you know you don't have consent,' she said.
...
In discussing the Kavanaugh allegations, former President George W. Bush's press secretary Ari Fleischer asked should 'any of us be held liable today — when we lived a good life, an upstanding life by all accounts — and then something that maybe is an arguable issue took place in high school?'
Survivor advocates have noted that such an event certainly follows victims decades later. Others focused on whether the severity of such an offense would indicate the likelihood of repeating it. Of college-aged men who self-reported acts that would qualify as rape, 63% admitted to repeat rapes, according to a 2002 study."
Discover more on this topic on AllSides.
Sexual Misconduct, Supreme Court, Brett Kavanaugh, Christine Blasey Ford, Story Of The Week, News