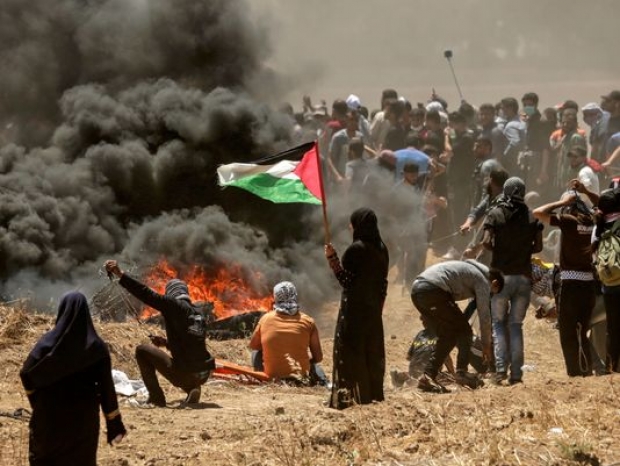 On Monday morning, Palestinian protesters and Israeli forces engaged in a deadly clash at the Gaza border as the US embassy opened in Jerusalem. Supporters of Israel assert that the country had the obligation to defend its border from the violent protests, carried out by the terrorist organization Hamas. Supporters of Palestine argue that Israel used unnecessary force, leading to the deaths of several unarmed civilians.
Take a look at some other big stories this week: Senate Passes Resolution to Reinstate Net Neutrality Regulations, Supreme Court Rules States Can Legalize Sports Betting, and President Trump Unveils Plan to Lower Prescription Drug Prices.
Snippets from the Center
Israel condemned for 'eye for an eyelash' violence in Gaza deaths
USA Today
"Palestinians buried their dead Tuesday as global condemnation intensified against Israel one day after Israeli troops killed scores of protesters and wounded thousands more along the Gaza border.
...
Michael Lynk, the United Nations special rapporteur on human rights in the Palestinian territory, condemned Israel’s response to the largely unarmed demonstrators.
'This blatant excessive use of force by Israel — an eye for an eyelash — must end, and there must be true accountability for those in military and political command who have ordered or allowed this force to be once again employed at the Gaza fence,' Lynk said.
The U.N. Security Council met to discuss the violence but wrapped up for the day without taking action. Nikki Haley, the American envoy to the U.N., blamed Hamas for the violence and said Israel acted with restraint.
...
Palestinians began a series of protests six weeks ago dubbed the Great March of Return. More than 100 Palestinians have been killed in clashes since the protests began. Hamas Khalil al-Hayya, a senior Hamas official, called for an 'Islamic intifada,' or uprising, in response to the deaths.
Hamas leader Ismail Haniyeh, with protesters east of Gaza City, vowed that the protests will continue."
Snippets from the Left
Israel’s use of fatal fire in Gaza: Excessive force or justified mob control?
Washington Post
"Fourteen-year-old Wisal Sheikh Khalil had wire cutters out and was trying to break through Gaza's boundary fence into Israel when she was shot dead by Israeli soldiers on Monday, according to her younger brother, who was with her at the time.
She was one of at least 60 Palestinians killed by Israeli troops during protests this week along the fence, according to local health officials.
...
Lt. Col. Jonathan Conricus, a spokesman for the Israeli military, said soldiers would not be shooting to kill a fence-cutter such as Khalil. He said it was a 'hectic area with smoke and fires and lots of moving people.' He added, 'The command that is issued to our troops is to shoot towards the legs.'
But multiple videos have surfaced apparently showing Israeli forces shooting unarmed protesters. A video in April showed a Palestinian running away from the border fence with a tire before being shot in the head.
...
Khalil's mother recounted how her daughter had been looking forward to the demonstrations for weeks. In previous weeks, she had filled bags with rocks to carry to the stone throwers at the front. Her mother said she had tried to stop her from going to the protest this week, but Khalil was determined.
'Maybe I will die, but others will get in,' she recalled her daughter saying. 'She kept saying if we liberate our land, we'll find a house. She said if I die, I'll be less of a burden.'"
Snippets from the Right
Israel Has the Right and Obligation to Defend Its Border with Deadly Force
National Review
"One of the enduring mysteries of modern political discourse is the way in which smart people — who are not remotely anti-Semitic — impose curious, unworkable double standards on the nation of Israel. Let’s take, for example, the response of many on the left to the so-called Great Return March, an effort by thousands of Gazans to storm the Israeli border.
After all, the international legal standards are clear. A nation has the right to protect the integrity of its border, and that right is supplemented by an inherent right of self-defense in the face of a hostile foreign power.
...
Moreover, every reasonably informed person knows that Hamas has a long history of using human shields, including women and children, to drum up international sympathy and deceive gullible foreign critics into believing that Israel is using lethal force against peaceful protestors who merely seek a peaceful resolution to an intractable conflict.
...
Hamas, to its very core, believes that Israel has no right to exist as a Jewish state. None. To its very core, it believes that all of Palestine must be under Islamic control. It has absolutely no moral qualms about intentionally inflicting as many civilian casualties as possible in the pursuit of its absolutist goals. Israel could moderate its approach to Gaza tomorrow, and Hamas would seize as many assets as it could to construct terror tunnels and rebuild its military infrastructure. That’s the sad reality of life in Gaza.
And that sad reality presents Israel with few good options. That’s what evil does. It rarely presents the forces of reason with easy or simple solutions."
Discover more on this topic on AllSides.
Israel, Palestine, Gaza, Story Of The Week, News