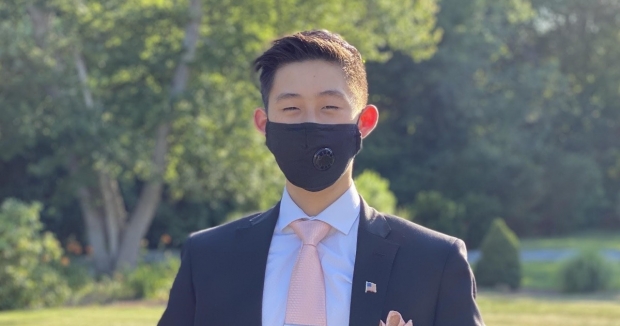 While others his age racked up victories playing Fortnite, danced to the Old Town road challenge as they scrolled through Tik Tok, or experimented with face-altering filters as they messaged friends on Snapchat, Andrew Juan was embarking upon a political career.

Until his sophomore year of high school, Andrew Juan was no different than his peers: he was unaware of politics and ingrained in high school social life. But then Andrew Juan stumbled upon Andrew Yang.

“I came upon this dude named Andrew Yang through an Instagram ad that was just some ridiculous rap video,” Andrew said, recalling his first encounter with Yang’s 2020 presidential campaign. “...but in this moment of boredom and entertainment, I decided to look more into this person named Andrew Yang.”

Initially, Juan considered Yang’s policies to be ridiculous. But Juan soon “...fell into a wormhole of Wikipedia searches about Andrew Yang,” eventually saying, “‘hey, this guy is kinda cool and I may want to work for him.’”

As Juan's fascination with the Yang2020 campaign mushroomed, he decided to venture upon the campaign trail, joining Yang’s campaign in an entry level role and responding to emails from Yang’s supporters.

Eventually, Juan's role expanded, and he became the National Youth Director of the Yang2020 campaign. His role entailed leading a team of over 2,000 students and utilizing innovative strategies to reach a younger segment of the electorate. Some of these strategies included using apps like Reddit and Discord, which are largely used by millennials and Gen Zers.

Intriguingly, it was during this campaign that Juan noticed an “interesting phenomenon.”

When attempting to converse with fellow Democrats about human centered capitalism and universal basic income, key aspects of Yang’s campaign platform, Juan was met with scoffs. Even though the Yang campaign was trying “...to find a way to make capitalism focused on benefiting the humans and individuals involved in our system,” their policies were “viewed as extreme” across the political spectrum.

Furthermore, Juan told me that disdain for Yang’s policies was especially strong amongst Democrats further left than Yang, saying, “We actually tended to have more moderate Republicans support Yang than we could have discussions with Bernie supporters and people that were slightly more left than Andrew Yang.”

This experience inspired Juan's belief that there “needs to be an opportunity to” talk about and solve issues. And this belief inspired the creation of the Young Americans Coalition for Unity.

The Young Americans Coalition for Unity (YACU) is an organization “dedicated to engaging youth in politics and promoting unity and bipartisanship.” Juan leveraged the 2,000 members of Youth for Yang to form YACU after Andrew Yang’s presidential campaign ended.

Since its creation in 2020, YACU has introduced “The Youth Unity Pledge.” This pledge is divided into two parts: one pledge for the “people'' and another pledge for politicians.

Recently, the organization has merged with the Institute for Youth in Policy, which Juan says is “a great opportunity for [them] to connect [both organizations’] resources” behind the common goal of unity.

As YACU continues to grow and evolve, Juan's goal of creating “open minds and open hearts in the future” continues its march towards fruition.

Jackson Lanzer is a freshman at the Elliott School of International Affairs at George Washington University. He has contributed to the Contested Politics Blog and the Bridge Alliance Blog, and he currently writes depolarizing articles for AllSides. Additionally, his writing has been referenced in USA Today, and he has won several regional Scholastic Writing Awards for critical essay writing and journalism. Jackson has a Center bias.