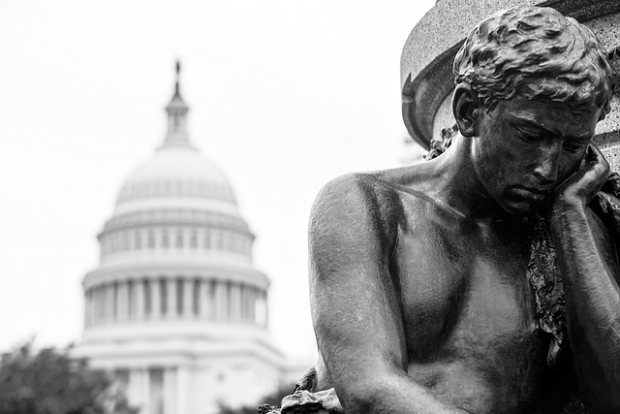 Whether extremely conservative or steadfastly liberal, partisan minds think alike in many ways. And the reason why may be deeper than we realize.

While we might consider ourselves unbiased and logical, the truth is that Americans often simply come to reflexive conclusions about politics. Rather than focusing on the truth, instead we dedicate ourselves to defending the party with which we identify. After all, when we live in a society where we’re forced to choose between the lesser of two evils, recognizing any evil in our own choice is hardly advantageous.

For example, can you ascertain to which political party these hypothetical speakers might belong?

As you may have noted, these statements could just have easily come from conservatives as from liberals. This may seem humorous, but there’s nothing funny about the blinders of partisan loyalty crippling our ability to think independently and rationally.

While racial tensions in America are often in the news, a 2014 study by Stanford University political scientists Shanto Iyengar and Sean Westwood has found that political party bias is even stronger than racial bias.

The study, Fear and Loathing Across Party Lines, found that on average, Republicans felt more animosity towards those labeled Democrats than gays or people on welfare. Democrats disliked Republicans more than they disliked “big business.” Researchers found that hostile feelings for the opposing party were “ingrained and automatic,” and political polarization led to confrontation rather than cooperation.

Partisan bias even proved to be a factor outside the political spectrum. Partisanship made a much greater difference than race when subjects were asked to select recipients for scholarships based upon resumes that had cues for race and political ties. Even when a candidate from the opposing party had better credentials, both Democrats and Republicans chose the candidate from their own party most of the time. But with respect to race, merit prevailed.

The researchers also found that when playing a trust game, subjects were significantly more trusting of others who shared their party affiliation, while race didn’t play a factor at all.

In 1960, 5% of Republicans and 4% of Democrats said that they would feel "displeased" if their son or daughter married outside their political party. By 2010, those numbers had reached 49% and 33%.

In the opinion of NY Times columnist David Brooks, we’re in an era when religious affiliation and ethnic identification among the educated is down, and “people are building their communal and social identities around political labels.” Politics have become hyper-moralized, making political issues “symbols of worth and dignity.”

When we define our self-worth by our political party, it’s not in our best interest to notice the faults within our group. This leads voters to simply support their parties rather than give them true critical evaluation.

We don’t allow ourselves to openly consider any dissenting opinions because it betrays not only our identity, but our morality as well. But preconceived bias is not moral, nor is it fair. It’s simply prejudice.

It’s ironic that while our main quest in identifying with a political party to be principled and just, partisan biases lead us to be less of both.

Other causes are at work as well. We’re surrounded by forces that exacerbate our biases. American neighborhoods have become more politically homogeneous, creating a literal distance between conservatives and liberals that can lead to a divide of understanding.

In addition, Democrats and Republicans not only tend to rely on different sources for their news, registered party members are inundated with mailings promoting a one-sided view of political races. Neat, catchy headlines drive home the evils of the other side and the superiority of their party’s candidates, reinforcing preconceived notions. Busy voters typically don’t go to the trouble to seek out views from the opposing side.

We put ourselves into an intellectual prison when we don’t allow ourselves to think outside the box of our political group. When we focus on pitting “us vs. them,” we fail to remember that the objective of our government is about maintaining the fairness and freedom that allows us all to live the way we choose.