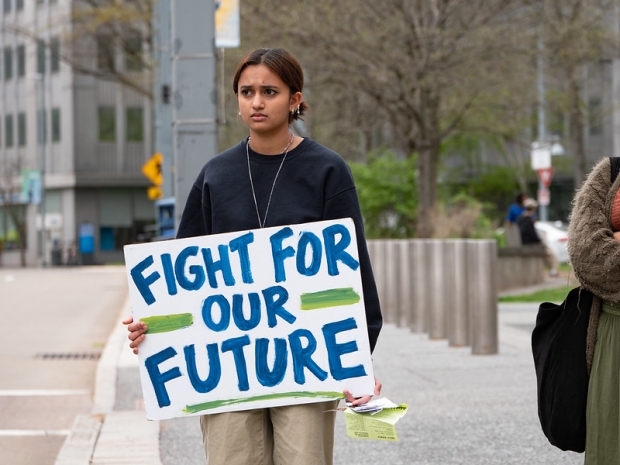 This piece was written by Jessica Carpenter from BridgeUSA, which AllSides rates as Mixed. Read more about Mixed ratings here.

This midterm election, 27% of voters aged 18-29 cast their ballot in their local elections. This is the second-highest youth turnout during the midterms in the past 30 years, and it challenges the idea that young people don’t care about voting, or about politics in general. 27% is only activating about a quarter of the youth vote, but it’s already proving to make a difference in our elections.

If political leaders across the political spectrum hope to be successful, it’s obvious they need the youth’s support. The problem is that both parties are missing what the current youth votes – and non-votes – are telling them.

Young people are navigating the political landscape through a lens of fear and apathy. Increasing political division has made many of us hopeless, frustrated, and mistrusting of our institutions. We feel unheard when it comes to the issues we care about, and we aren’t seeing actual solutions. If political parties wish to unlock the youth vote in 2024, they need to include us in the conversation, ditch the toxic partisanship, and work to produce sensible solutions.

When trying to understand the youth vote, we must first look at why some young people aren’t showing up in the first place. At 24 years old – one of the oldest members of Gen Z – my political experience has been characterized by violence, economic pain, and division. I was born two years before 9/11, went to middle school during the 2008 recession, began college right after the 2016 election, and graduated during a global pandemic. To top it off, we were faced with the reality of unresolved racial and ideological tension through the Black Lives Matter protests and Jan 6 Capital Riot, and growing international tension when Russia invaded Ukraine earlier this year.

All of these events have caused many in my generation to be discouraged, mistrusting of our institutions, and deeply worried about the future. But, instead of posing sensible, actionable solutions, our political leaders have turned to partisan legislation and attacking those across the political aisle. Not only are the worries of my generation being overlooked, but the issues we care about are also used as campaign talking points, which are then left unresolved after election season and repeatedly used again as an incentive to vote for a candidate the next time around – a treat dangling above voters’ heads on a never-ending treadmill. It’s not hard to see why some young people are apathetic and disengaged with this type of behavior, in fact it’s completely rational.

To win the youth vote, political parties need to put aside superficial politics and get serious about including young people in their political strategy. To do this, we first need to be part of the conversation. This means listening to and speaking to us.

A 2021 poll by Pew Research Center showed that young adults between 18-29 are less likely than older generations to feel represented by the two major political parties, and we are also less likely to identify with a specific party. Therefore the traditional approaches to social and political issues may be less enticing to younger voters.

These are topics that the Democratic Party is currently better at talking about; If Republicans want to gain the attention of young people, they also need to start talking about these issues seriously. Young people need to see that our leaders are listening to us and that our concerns are being heard.

Not only are we aligned on several key issues, but Gen Z is also a values-based generation. We value authenticity, diversity, and connection, and make decisions based on those values. Therefore, to increase their chances of reaching youth voters, leaders must stop exploiting division and ditch partisan talking points. Instead, consider embracing our diversity as a nation–ideologically, racially, ethnically, religious, etc.– and help find ways we can move forward together.

Gen Z is tired of political division that leads to inaction. We are overwhelmed by the extremes who continue to control the narrative around politics. We need leaders who will get back to the heart of our country, and who will address the fallout from the pandemic, and the growing tension and hate that has led us to become more disconnected from each other.

Finally, young people want action. America’s youth care about the same issues as other voters, however, we are rarely considered in long-term political strategies. This year, young voters were driven to the polls primarily by the issues of abortion, student debt, climate change and gun legislation. Despite these topics being discussed for years, we are still seeing inaction or failed, partisan policies that have yet to address the underlying problems.

To change this, both parties need to start putting common goals and sensible, long-term solutions ahead of partisan wins. Both the Republican and Democratic parties need to start considering young people’s concerns in their political strategy because our success as a generation relies on decisions that are made today. We cannot tolerate having our future considered only during election years as a means to win votes.

It’s obvious that young people are making a difference in our elections. This year’s youth voter turnout should be a wake-up call for our leaders and a sign to take us seriously. If they want our votes, something has to change. By including young people in the conversation, focusing on reuniting our country, and choosing to work together to find sensible, common ground solutions, both parties stand a better chance at unlocking more of the youth vote in years to come.

BridgeUSA is the largest and fastest multi-partisan student movement fighting polarization in colleges and high schools across the nation. Through their college and high school chapters, BridgeUSA students are standing up for a politics that rewards empathy and dialogue over division and anger. Learn more about BridgeUSA.

This piece was reviewed and edited by Clare Ashcraft, Bridging & Bias Assistant at AllSides (Center bias).