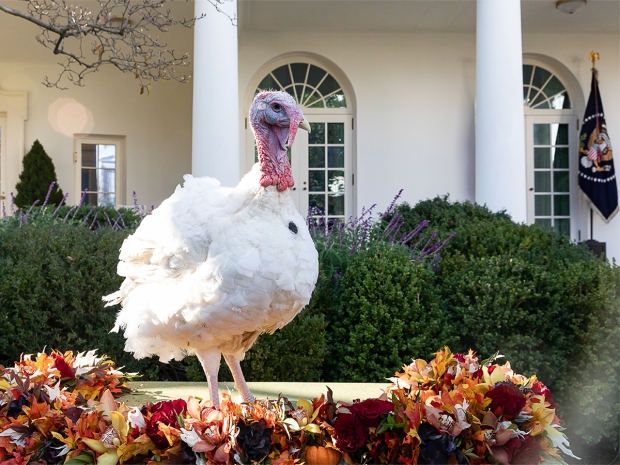 Each November, Thanksgiving brings people together to share company, food, gratitude — and a whole lot of thoughts and opinions.

Sometimes, chats with family and friends can turn a warm environment cold if the wrong topic comes up. Here's five ways you can handle those tough political conversations at Thanksgiving dinner.

Looking to get some practice in beforehand? Check out the Angry Uncle Bot, a project from Smart Politics that allows users to debate political topics with a very opinionated robot.

"Jamal Hinton received a random text in 2016 inviting him to a Thanksgiving dinner with a family that wasn't his. Four years later, he's planning to share the dinner table yet again with Wanda Dench, the "grandma" who first invited him."

"Hinton was confused and asked for a photo of the person who had texted him. "I actually did think it was my grandma," Hinton told The Arizona Republic in 2016. When he saw the photo of a woman he had never met, he responded she wasn't his grandmother but jokingly asked, "Can I still get a plate tho?" Dench, doing "what grandmas do," responded: "Of course.""

How to fight with your family at Thanksgiving

"Political agreement in families can also affect the dynamics of what is acceptable to talk about at dinner. While families that had a tradition of discussing anything weighty, even controversial subjects, maintained closer ties after Thanksgiving 2016, that’s not necessarily because those families were good at disagreeing, [studies show]. In a lot of cases, families were comfortable discussing a wide range of subjects because they all assumed they shared the same values. And if you do share basic values, it’s easier to disagree about the details without getting hurt."

"President Trump told supporters at a rally held in Sunrise, Fla., Tuesday that he wouldn’t allow the “radical left” to change the name of Thanksgiving. The president, who recently switched his residency from New York to Florida, claimed at his "homecoming rally" that the left wants to change the name of the upcoming secular holiday after what he previously described as “a war on Christmas.”"

It's a wonderful time to be alive

"Politics are not our life. The people we love, our faith, our families, the things we do that bring our lives joy and meaning — these things are far more important than politics. As George Will has pointed out: There are 357 million Americans; 350 million of them did not watch cable news or listen to talk radio yesterday. So, as we begin to carve our turkey — which costs 4 percent less than last year — let’s tune out the politicians and their doom and gloom. It is a wonderful time to be alive. We really have so much to be thankful for."

"As our country reckons with the persistent racism and cultural insensitivity that has, for so, so, long, been hiding in plain sight, yesterday's model of Thanksgiving no longer cuts it. It's time to figure out what's next."

"The first step is to take a red pen to the insensitive myths and practices surrounding Thanksgiving, particularly as it is taught to young children. Curricula for the holiday vary wildly across the country, and some children might simply be learning about gratitude, some about the oppression of indigenous people, and, still, some might be encouraged to dress up like Pilgrims and Indians to recreate the romanticized first Thanksgiving that never was."

How to celebrate Thanksgiving — without mentioning Trump

"This Thanksgiving, plan on observing a day of silence – Trump silence. Try to enjoy this day of togetherness and gratitude without uttering the name of the 45th president. Ask your friends and family attending your Thanksgiving Day dinner to honor your plan."

"We recognize that not everyone will be able to go an entire day. For guests at your meal who feel they must talk about Trump, we recommend they pretend to be smokers, step outside, and furiously shout to themselves until they feel they can return to the table. You might also encourage them to call an MSNBC emergency Trump hotline where they can bark expletives for a small fee. They can return once they have recovered their composure."

Discover more on this topic.