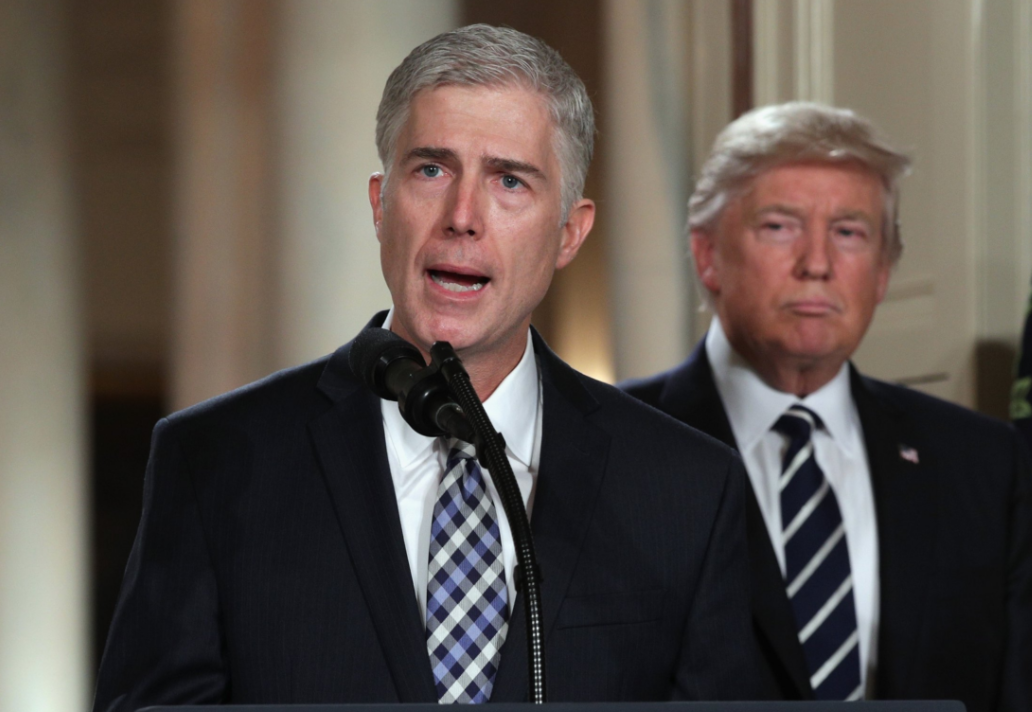 President Trump named his nominee to replace Scalia on the Supreme Court this week, Neil Gorsuch. While the country reacts to the announcement, Senate Democrats are still thinking about the appointment of Merrick Garland and are considering filibustering the vote on Gorsuch, which would delay or block it completely. According to some, the nuclear option is on the table, which would allow Senator Mitch McConnell to confirm Gorsuch without the vote.
See other news featured by AllSides such as Reactions to the Refugee Ban, Acting Attorney General Fired, Trump Derides Australia Trade Deal and the latest AllSides News.
Snippets from the Right
Neil Gorsuch: In the Mold of Antonin Scalia
CBN
"Trump said he'd thought longer and harder about this pick than any other he's made as president or president-elect. That's because, as he pointed out, a justice could serve 40 or 50 years and make decisions that could affect generations across centuries.
...'He (Gorsuch) hasn't written any opinions per se in the area of abortion, which tends to be a hot-button issue,' [John Malcolm] said. 'But he did write a book, actually, based on his doctoral dissertation on euthanasia and physician-assisted suicide. And he said that the reason he opposed those is because of the inviolability of life. So perhaps that gets some insight into his thinking.'
On the issue of religious liberty, Gorsuch ruled for both Hobby Lobby and Little Sisters of the Poor in their legal battles against being forced to cover abortifacient contraceptives for their employees - something that would've violated their religious beliefs."
Snippets from the Left
Neil Gorsuch: President Trump’s anti-choice pick for the Supreme Court
Salon
"Within minutes of President Trump’s nomination of federal judge Neil Gorsuch to the Supreme Court, several hundred demonstrators had converged on the steps of the Supreme Court in Washington, D.C. to protest his selection.

'Leave it to Trump to distract the country from a constitutional crisis by appointing a right-wing litmus test judge to the court,' said Nancy Schoolmacher of College Park, Maryland. 'We just had to come down and do something,' added her friend, Barb Considine, standing in the throng of people and TV cameras.
...
Gorsuch’s nomination sets the stage for one of the biggest domestic political fights in years, after Senate Republicans spent nearly a year willfully ignoring their constitutional responsibility to consider President Obama’s nominee to the court, Merrick Garland. Gorsuch, despite a reportedly mild-mannered temperament, is known for his anti-choice and anti-LGBT stances, pro-employer rulings in labor disputes, anti-regulatory attitudes, dismissal of scientific expertise, and pro-police bias in brutality cases, according to statements from public interest groups issued after the announcement."
Snippets from the Center
Neil Gorsuch: The case for and against Trump's Supreme Court nominee
USA Today
"In Gorsuch, Trump gets someone who enthuses conservatives but possesses the stellar credentials and winning personality needed to assuage some Senate Democrats — or, at a minimum, virtually every Senate Republican.
...
Con: He isn't Merrick Garland. Most Senate Democrats likely will argue that no Trump nominee deserves their support after Republicans refused to grant a hearing or a vote to Garland, President Obama's compromise choice last March to replace Scalia.
Pro: He's Scalia Light. A firm adherent of the late justice's belief that the Constitution and laws should be followed rather than liberally interpreted, Gorsuch seems like a deserving recipient of Scalia's seat.
Con: 'Scalia' is a dirty word among liberals who excoriated the late justice for his acerbic opinions and rhetoric, even if on the losing side, on issues ranging from civil rights to same-sex marriage.
Pro: He's a gifted writer who goes out of his way to make his opinions accessible to average readers, in the tradition of Scalia and the most recent Supreme Court nominee, Justice Elena Kagan."
Discover more on this topic on AllSides.
Tags:
Story of the Week
Neil Gorsuch
News
Supreme Court

END_OF_DOCUMENT_TOKEN_TO_BE_REPLACED
Go ad-free!   About these ads