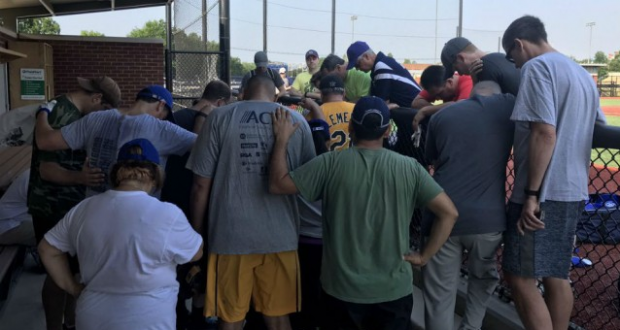 If you’ve tuned into the news within the last 24 hours, even if just for a cursory glance, you’ve most likely heard about the tragic shooting in Alexandria, VA – where a gunman opened fire on the GOP’s Congressional Baseball Game practice.

But the most striking part of the recent press coverage has been the resulting call for unity on both sides of the political aisle, perhaps more emphatic than ever before. At AllSides, we endeavor to accomplish this very goal – to free people from the filter bubbles that blind, deceive and turn us against each other.

“I ask each of you to join me to resolve to come together to lift each other up, and to show the country, to show the world that we are one House, the People’s House, united in our humanity,” said House Speaker Paul Ryan.

“To my colleagues, you’re going to hear me say something you’ve never heard me say before. I identify myself with the remarks of the Speaker,” responded House Minority Leader Nancy Pelosi. She continued, adding, “I pray for Donald Trump, that his presidency will be successful, that his family will be safe,” – a striking departure from the partisan rhetoric that has plagued both parties in recent months.

In a speech shortly after the attack, President Trump commented, “We may have our differences but we do well in times like these to remember that everyone who serves in our nation’s capital is here because, above all, they love our country…We are strongest when we are unified and when we work together for the common good."

His 2016 opponent, Hillary Clinton, echoed the same sentiments, even after an uncharacteristically toxic election cycle. “2 sides take the field tomorrow, but we're all ultimately on one team,” she tweeted.

So what can we do to alleviate the hyperpartisanship seen throughout the country today, particularly in the wake of such tragedy? How can we transform these consolatory messages into action that increases long-lasting tolerance for the “other side”?

Perhaps the most comprehensive directive: ignore the common calls to rage and anger when there is disagreement across the aisle, and instead brainstorm and encourage ways to work together to solve problems. It sounds simple, but in a political environment where hatemongering seems to be the principal tactic, it’s enticing to employ tunnel vision when we disagree.

Don’t just listen to the “other perspective” – actually try and understand it. AllSides can help you digest different viewpoints by providing a balanced view from news sources across the full political spectrum.

Step out of your personal echo chamber and reach out to a friend or acquaintance who holds an opposing view. Follow the Living Room Conversations model to better understand who they are, where they come from, and why they believe what they believe.

Teach the next generation to discuss and understand each other, especially when they disagree. That is what the AllSides for Schools program is all about.

And finally – seek out and share instances of people coming together from opposite ends of the spectrum for the common good. People tend to emulate what they see, so let’s actively promote this productive positivity. The recent calls for unity in Washington, D.C. serve as powerful examples.

Perhaps Sen. Bernie Sanders (I-Vt.) put it best when he was forced to publicly grapple with the fact that the gunman had volunteered for his presidential campaign.

“I am sickened by this despicable act. Let me be as clear as I can be: Violence of any kind is unacceptable in our society and I condemn this action in the strongest possible terms," he said. “Real change can only come about through nonviolent action, and anything else runs against our most deeply held American values."

In a political climate where we are more polarized than ever before – where we jump to demonize the “other” – we must remember that the cowardice of a gunman does not characterize any particular politician or group at large. The unanimity seen throughout the country yesterday serves as excellent proof that the violent actions in Alexandria do not represent what America stands for.

Tragedy has a remarkable way of bringing people together, providing a bridge that people of all persuasions can cross. Let’s not allow partisan politics to once again diminish that approach. Let’s keep it moving forward.