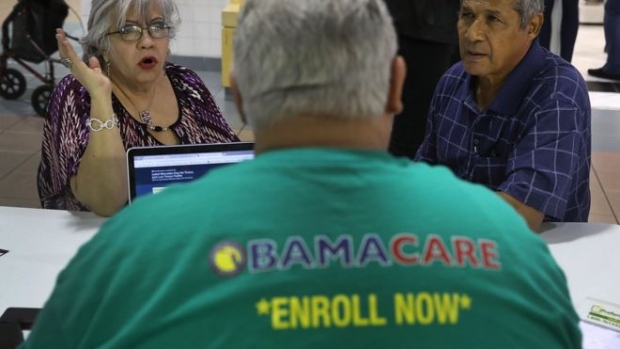 A federal judge on Friday struck down the Affordable Care Act as unconstitutional, ruling that it was invalidated when lawmakers eliminated the tax penalty for the individual mandate. The law will remain in effect, pending appeal.
Some Obamacare critics praised the ruling as a positive step toward enacting new health care legislation. Many others across the aisle say the move will backfire on Republicans, writing that such decisions should be made by Congress — not judicial fiat.
Happy Holidays! Anxious about the pesky political discussions that happen around the dinner table? Check out our recent blog on how to navigate tricky conversations with those on the other side of the partisan spectrum.
Take a look at some other big stories this week: Senate Passes Criminal Justice Bill, Trump Orders U.S. Troops To Withdraw From Syria, and Trump Administration Issues Ban on Bump Stocks.
Snippets from the Right
Texas ObamaCare Blunder
Wall Street Journal Editorial Board
"No one opposes ObamaCare more than we do, and Democrats are now confirming that it was designed as a way-station to government-run health care. But a federal judge’s ruling Friday that the law is unconstitutional is likely to be overturned on appeal and may boomerang politically on Republicans.
...
The Affordable Care Act has also been up and running since 2014, which means so-called reliance interests come into play when considering a precedent. Millions of people now rely on ObamaCare’s subsidies and rules, which argues against judges repealing the law by fiat.
...
As for the politics, Democrats claim to be alarmed by the ruling but the truth is they’re elated. They want to use it to further pound Republicans for denying health insurance for pre-existing conditions if the law is overturned."
Conservative Counterpoint
'Unconstitutional' ObamaCare is deeply flawed, and it's time to do away with it
Fox News Opinion
"ObamaCare's defenders plan to appeal the decision to the U.S. Court of Appeals for the Fifth Circuit and the U.S. Supreme Court, if necessary. The legal fight could drag on for years.
If the ruling is upheld, it'll be a huge victory for the millions of Americans struggling with higher health care costs thanks to ObamaCare's onerous regulations. It's time for Congress to acknowledge ObamaCare's failures and devolve authority for health policy to the states.
...
The Affordable Care Act faces an uncertain future after Friday's court ruling. But one thing is clear – Americans deserve better than ObamaCare's expensive, inflexible coverage. Shifting power back to the states would give patients access to better, cheaper care."
Snippets from the Left
A Partisan Ruling on Obamacare
New York Times Opinion
"Disenchanted that a Republican-controlled federal government wouldn’t repeal every word of the law, Texas and a coalition of states tried a sleight of hand: They leaned on President Trump’s 2017 tax bill, known officially as the Tax Cuts and Jobs Act — which zeroed out the tax penalty of the health care law’s individual mandate — and argued that the mandate itself was unconstitutional.
...
This all-out assault on health care is one reason Democrats did so well in the midterm elections, as voters rejected anti-Obamacare candidates at the polls. They included several lawmakers who had gleefully voted for Mr. Trump’s tax bill less than a year earlier.
...
This partisan, activist ruling cannot stand. If it’s not reversed by the conservative United States Court of Appeals for the Fifth Circuit, then it’s off to the Supreme Court, where all five justices who, in 2012, already determined that the Affordable Care Act was constitutional will still be there."
Snippets from the Center
Obamacare: Texas court rules key health law is unconstitutional
BBC News
"Twenty states argued the whole law was invalidated by a change in tax rules last year which eliminated a penalty for not having health insurance.
...
President Trump promised to dismantle Barack Obama's landmark 2010 healthcare law, which was designed to make medical cover affordable for the many Americans who had been priced out of the market.
But despite his Republican Party having majorities in both the House of Representatives and the Senate, the ACA is still operating.
...
Meanwhile, the White House called on Congress to replace Obamacare with an affordable healthcare system which protects people with pre-existing conditions.
But other states have argued that eliminating Obamacare would harm millions of Americans, and pending any appeal the landmark health care law remains in place."
Discover more on this topic on AllSides.
Healthcare, Obamacare, Affordable Care Act, Donald Trump, Story Of The Week, News