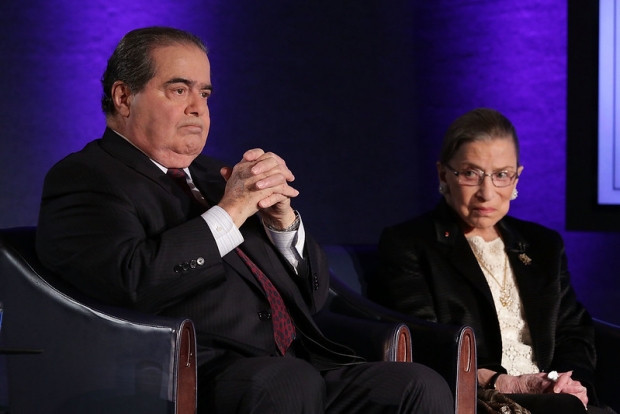 Supreme Court Justice Ruth Bader Ginsburg's passing last Friday at the age of 87 instantly became one of the biggest stories in the United States, even amid the coronavirus pandemic and a bitterly partisan presidential election.

These days it almost feels rare to hear a public figure spoken of with such reverence by leaders from both sides of the aisle (and across popular culture). But we observed that with the passing of John Lewis weeks ago and now with the passing of Ginsburg. From Hillary Clinton to Kevin McCarthy, Barack Obama to Donald Trump, the praise of a life well lived and Justice Ginsburg’s legacy of conviction and intellectual courage has resounded across the political spectrum in the short hours since her passing.

For our purposes at Braver Angels it is worth recalling the friendship she held with her rival on the court; titan of the bench Antonin Scalia. It was a deep friendship that went back before their years on the Supreme Court, back to when they served alongside each other in the DC Circuit Court of Appeals.

Years after being elevated to the Supreme Court, but before Ginsburg’s Supreme Court confirmation in 1993, Scalia declared at a roast in her honor “I have missed Ruth very much since leaving the court of appeals. She was the best of colleagues, as she is the best of friends. I wish her a hundred years…”

Many of us in ordinary American life have, over recent years in particular, found it impossible to maintain friendship across political difference even though the weight of our opinions are not likely to turn the course of our nation’s history on their own.

Ginsburg and Scalia however did indeed find themselves in that rarified position. Perhaps their ability to hold the tension between their disagreements and their ability to care for each other nevertheless signaled their worthiness to hold such responsibility in the first place?

“Toward the end of the opera Scalia/Ginsburg, tenor Scalia and soprano Ginsburg sing a duet: ‘We are different, we are one,’ different in our interpretation of written texts, one in our reverence for the Constitution and the institution we serve. From our years together at the D.C. Circuit, we were best buddies. We disagreed now and then, but when I wrote for the Court and received a Scalia dissent, the opinion ultimately released was notably better than my initial circulation. Justice Scalia nailed all the weak spots—the ‘applesauce’ and ‘argle bargle’—and gave me just what I needed to strengthen the majority opinion. He was a jurist of captivating brilliance and wit, with a rare talent to make even the most sober judge laugh.”

After the initial launch of the opera, and before Scalia’s passing, Ginsburg was asked to explain what made their friendship possible.

“The song that they sang tonight, ‘we are different , we are one,’ I think that captures it.”

Ginsburg believed that our differences do not have to make us enemies. When we are sincere in what we believe, even when we are wrong, the places at which we differ may yet allow us to strengthen our total understanding of what is true. For all of her great accomplishments, this quality of character is too a part of Justice Ginsburg’s legacy. We honor this at Braver Angels.

Imagine an America in which left and right challenge each other without viewing one another as enemies? Imagine a nation in which we could hear the legitimate concerns and experiences of our fellow Americans and honor one another's dignity rather than shutting our ears? Imagine a nation in which we worked together, through our bitter disagreements, to achieve the common good of all?

Such an America is a naïve idea only so long as we treat it as such. But when we commit to making it real the possibility begins to come to life. These seeds are sprouting now. We hope you water them with us.

John Wood Jr. is a national leader for Braver Angels, a former nominee for congress, former Vice-Chairman of the Republican Party of Los Angeles County, musical artist and a noted writer and speaker on subjects including racial and political reconciliation. He has a Center bias.