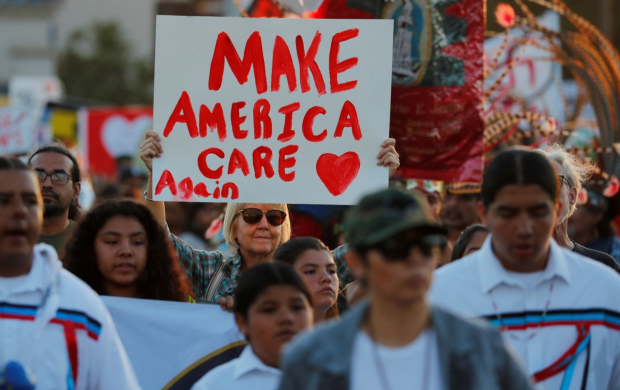 A series of President Donald Trump's tweets directed toward four progressive Democratic congresswomen last weekend ignited debates on the definition and proper contextual use of the word "racism."

All political sides of the media used the word differently in coverage. Reporters, commentators and opinion writers on the left frequently focused their stories around the meaning and current state of "racism," with most arguing that this is a new low for Trump. Many in the center wrote similarly, with some referencing the Associated Press' newly released guidelines on using the word correctly in news coverage. Many reporters and columnists on the right rejected the word's use in this sense, calling it a politically-charged mischaracterization.

To better understand how people across the spectrum use the words "racism" and "racist," check out our Red Blue Dictionary entry: racism - racist.

Check out some other big stories this week: Trump Administration seeks to end asylum protections, DOJ not charging NYPD officer in Eric Garner case, and US Navy downs Iranian drone.

Trump's tweets reveal left and right define "racist" very differently. Those on the left and right disagreed as to whether or not media outlets should refer to Trump's sentiments as racist, revealing various definitions of the term.

"To many on the left, the tendency often seen in the media and other institutions to shy away from direct charges of racism only allows racism to fester."

"To many on the right, however, race is another area where the left has gone completely overboard. “I’m a racist. You’re a racist. Donald Trump’s a racist. Nancy Pelosi was a racist until she attacked Trump for racism,” writes Trump supporter Roger L. Simon in PJ Media. Such condemnation, he adds, “only makes people hate each other. It creates racism rather than solves it.""

"The debate around the “R word” is not new; nor, at this point, does it seem especially controversial. The Associated Press Stylebook—a trusted arbiter for newsrooms nationwide that is hardly known for its leftist radicalism—ruled in March that we should “not use racially charged or similar terms as euphemisms for racist or racism when the latter terms are truly applicable.” (Interestingly, the AP’s lead story on Trump’s tweets does not use either term without attribution.)"

"Calling a president’s words “racist” or “a lie” can legitimately be thorny. Should we throw the words around? Probably not. But we should use them when they accurately reflect the truth. Very simply, that’s our job."

"Mr. Trump acknowledged that social media had enabled him and others in the room to gain large followings, and signaled he understood that some pro-Trump content could cross a line."

"Several analysts doubted any concrete action would come of the summit, seeing it more as a way for Mr. Trump to fire up his base. A 1996 law protects internet services that host third-party speech from liability for content, and proposals to remove that protection are unlikely to win support in Congress soon."

Opinion: Report on racism, but ditch the labels

"I understand the moral outrage behind wanting to slap this particular label on this particular president and his many incendiary utterances, but I disagree. Journalism may not have come honorably to the conclusion that dispassionate distance is a virtue. But that's the fragile line that separates the profession from the rancid, institution-debasing cesspool that is today's politics."

"Report. Quote people. Cite sources. Add context. Leave the moral labeling to the people affected; to the opinion writers, the editorial writers, the preachers and philosophers; and to the public we serve. We just have to do journalism."

Trump, the Squad, and the "standard definition" of racism

"Donald Trump’s tweets, this past weekend, were of vintage racist stock. To tell someone to “go back” to the “places from which they came,” as Trump did, clearly addressing four congresswomen of color—Alexandria Ocasio-Cortez, Ayanna Pressley, Ilhan Omar, and Rashida Tlaib—is stereotypical, lowest-common-denominator racism, embedded in familiar scripts and powered by old tropes."

"This is the dull semantics of racism. The white conservative twists the discursive field so that he is the sane arbiter of what is or isn’t racist; everyone else is frivolous and excessive, “recklessly” invoking the most sacrilegious offense. This logic rests on the illusion that racism is mythically rare, that “racist” is a dangerous slur rather than a common condition."

"News organizations often debate how to describe controversial actions or statements in the most neutral way possible in an attempt to be evenhanded. During George W. Bush’s presidency, for example, newsrooms were divided over the use of the word “torture” to describe the administration’s tactics in interrogating terrorism suspects. More recently, the question has involved references to people who crossed international borders without authorization."

"It’s unlikely that readers or viewers will miss the implications of news reports that refer to such controversies obliquely. But the issue may be credibility and trust: Many people, particularly people of color, have long harbored the suspicion that the news media underplay stories about race and racism."

The race card has gone bust

"No reasonable person denies that racists still live among us or that racial discrimination can retard upward mobility. Still, evidence of racial bias in the past or the present is not proof that racism is responsible for current social disparities. After all, the pathologies we see in low-income black communities aren’t confined to those communities. As Harvard political scientist Robert Putnam wrote in 2017, “The white working-class family is today more fragile than the black family was at the time of the famous alarm-sounding 1965 ‘Report on the Negro Family’ by Daniel Patrick Moynihan.”"

Trump and the 'racist tweets'

"Is it “racist” to tell people who have contempt for the country — who abhor the common culture that makes us American — that they ought to go back to where they came from? It has nativist and reactionary overtones, but I don’t think it is racist."

"It would be racist to tell the progressive “Squad” that they don’t belong in our country because of their race or ethnic roots. I don’t understand Trump to have done that. He is attacking their radicalism, which they wear like a badge of honor."

Why racism is now the pornography of modern discourse

David Marcus for the Federalist

"While once we had, or thought we had, some fairly firm definitions for racist activity or speech, most having to do with intent or belief, we now have an “I know it when I see it” standard. The same problems underlie this standard in regard to racism: nobody can really know when [Trump] is guilty of it."

"As I have long warned, many white Americans have become so fed up with notion of their unintentional racism, and their duty to pay reparations for the sins of their fathers and mothers, that they have turned a blind eye to the racism that does actually exist. But are they really to blame for this?"