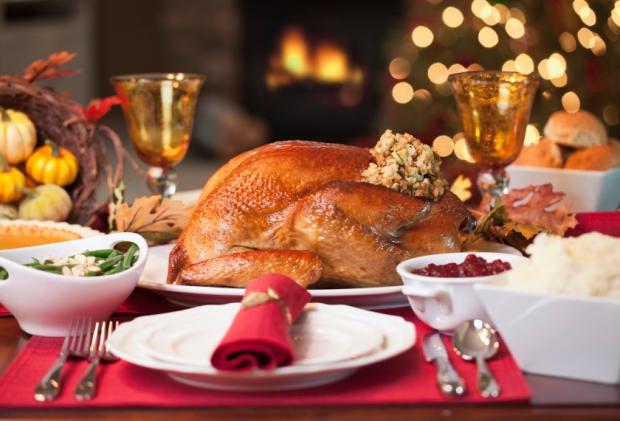 Every year around this time, but especially this year, we think about how holiday gatherings sometimes devolve into bitter arguments about political matters. If your family chooses not to talk about politics, there's advice for staying away from controversial topics. If you do end up talking about the election, either accidentally or on purpose, we have tips in our blog. (If you're anything like us, every conversation inevitably comes around to current events anyway.) Whatever your Thanksgiving conversation ends up being about, just remember to keep it civil. Happy Thanksgiving from all of us at AllSides!
See other news featured by AllSides such as Nikki Haley for U.N. Secretary, Trump Foundation Admits to Self Dealing, Trump Won’t Pursue Charges Against HRC and the latest AllSides News.
Snippets from the Right
Through the Looking Glass
Townhall
"As early as the 1840s, etiquette taught never to discuss religion or politics at the dinner table. This election season, the Emily Post Institute confirmed that 'the classic advice is ‘never discuss politics or religion,…' but it also recognized that passionate beliefs often lead to such conversations. Miss Manners (Judith Martin) wrote more bluntly of the demise of this nearly two-century-long convention: 'What happened to the etiquette rule banning casual social discussions of politics and religion is that it is roundly pooh-poohed and ignored. At best, it is thought to be a prissy and unnecessary restriction of adult conversation; at worst, it is considered a repression of free speech and the democratic process.'"
Snippets from the Left
5 tips for avoiding politics talk at Thanksgiving
Yahoo News
"Remember that relationships matter more than being right
Saltz says that 'being right might feel good in the moment,' but these people are loved ones, there is a history, and these relationships matter more in the long run.
Steer clear of known conflicts
'If you know discussing a particular topic is likely to spark a fight, it’s worth purposely avoiding it,' Saltz explained. It’s OK to say, 'Let’s not go there right now,' to move the conversation along without confrontation. Saltz also suggests coming up with a list of topics that are best to avoid, such as immigration or abortion, before turkey day so you are prepared if they come up."
Snippets from the Center
C’mon, Liberals, Give Your Trump-Voting Relatives Some Love on Thanksgiving
Daily Beast
"'To those of you racked with this sense of foreboding, I say, go home to your families; at this critical moment in American history it is now more important than ever that we try to talk through our differences, and there is no more possible place for us to begin to do so than with the ones we love.
...[D]on’t just engage your family members over the kitchen table to rescue them from their wrongheadedness, do it to expand the acuity of your own thinking."
More Snippets from the Center
This Thanksgiving, don't ignore politics. Democracy depends on it.
USA Today
"'This year’s presidential election perverted our national identity in ways that are still coming into focus, and it has forced the country to reckon with a future that feels perilous for many Americans. With Thanksgiving just 16 days after an election defined by incivility, many people aren't thinking about the bread they will break, but about the salt that will pour into raw wounds.
We can look at it as a punishment, or as a chance for redemption."
Discover more on this topic on AllSides.
Thanksgiving, Holidays