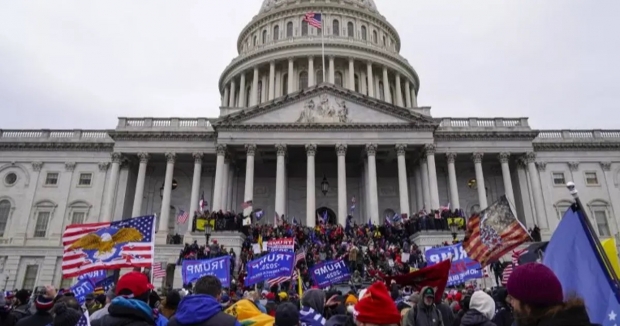 It’s been just over a year since the January 6 Capitol riot took place, and to call it polarizing would be a massive understatement. While some used the first anniversary as an opportunity to advance their partisan agenda, we found a few podcast episodes where the hosts took time to talk with people, learn other’s viewpoints, and start to bridge the divide that was deepened by January 6.

If last week’s coverage made you feel pessimistic, discouraged or entrenched in your ideas, give these episodes a try.

How Do We Fix It

Topic: Finding the opportunity for dialogue in the wake of the January 6 Capitol riot.

Especially Recommended For: Those who are feeling pessimistic and want to hear about progress towards bridging divides.

Summary: In this episode of How Do We Fix It, Richard Davies and Jim Meigs talk to Christy Vines. Vines is the President and CEO of Ideos, which hosted the first National Day of Dialogue on January 5th. On this day, through virtual events and the premiere of a documentary called Dialogue Lab: America, a coalition of organizations came together for realistic conversations and collaborative efforts to bridge the ever-growing partisan divide.

Don’t worry if you missed the events. Vines brings you through why the day was started, the goals, and some major moments from the documentary. If you are looking to learn more about bridging divides, how to have difficult conversations, and the future of American politics, look no further than this episode.

Here are a few other podcast episodes to check out this week.

The State of Polarization: 2022. Christa Case Bryant and Story Hinckley

Topic: Polarization today vs. last year, and how January 6 contributed.

Especially Recommended For: Those interested in how January 6 was reported.

Summary: Journalists are on the front lines of American polarization, constantly covering major events, interviewing important individuals, and reporting on the latest polls. In this podcast episode, hosts Richard Davies (also of the Fix It Show) and Ashley Milne-Tyte talk to two journalists from the Christain Science Monitor: Christa Case Bryant, a Congressional correspondent, and Story Hinckley, the Monitor’s national political correspondent.

This episode shows you more about how reporters view polarization, their hopes and fears, their regrets, and views about what the future may hold for journalism and access to information. It is easy at times to blame the media, but this episode allows you to hear what those in the media have to say.

Who is Responsible for January 6?

Topic: A debate on how the DOJ is prosecuting those involved in January 6.

Especially Recommended For: Those from across the political spectrum who really want to challenge their beliefs surrounding the January 6 Capitol riot.

Summary: In this episode of the Debate, co-hosted by Josh Hammer and Celeste Headlee, guests discuss the prosecution of people involved in January 6, specifically each person’s argument about how the DOJ is doing, and where they could be doing better.

There are two guests for this episode: David Gray Adler, the President of The Alturas Institute and Ben Weingarten, a senior contributor at The Federalist. What becomes increasingly clear throughout the episode is that each person has a unique narrative surrounding the events of January 6. The provocative debate will keep you engaged in the episode and will leave you with new information and viewpoints to consider further.

See more podcasts from across the spectrum on our Podcasts page.

Aidanne DePoy is a research intern for AllSides. She has a Left bias.