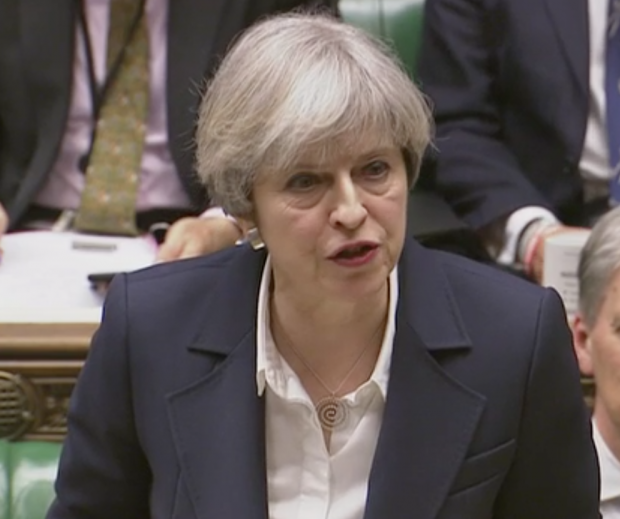 This week, the UK began formal Brexit proceedings, the long process of withdrawing from the European Union. Theresa May delivered Article 50 to the European Council, the first step in a two year long process. In April or May, the Council will meet to finalize the negotiation process. They will decide what the terms of separation will be during these meetings. Finally, the European Parliament will have to vote on and approve the terms. Whether or not they come to an agreement of terms, the UK will no longer be a apart of the EU in two years time.
See other news featured by AllSides such as Trump: Fight Freedom Caucus, NC to Repeal Bathroom Bill, Should Nunes Step Aside? and the latest AllSides News.
Snippets from the Center
Brexit Trigger Spells Trouble for U.K.’s Sweet Economic Run
Bloomberg
"Brexit uncertainty is already proving a factor in some companies’ investment plans, while faster inflation as a result of sterling’s depreciation may weigh on consumer spending. But while economists forecast a slowdown this year, the consensus is for a very modest drop to 1.7 percent from 1.8 percent. The economy still has momentum, and there’s a chance that the pickup in inflation is at least partly matched by wage growth, softening the hit on consumers.
May invoked Article 50 of the EU’s Lisbon Treaty in a letter to EU President Donald Tusk on Wednesday, striking a conciliatory tone. In response, European leaders pledged to work 'constructively' with the government in London, expressing hope that the U.K. would remain a close partner."
Snippets from the Right
Top EU Brexit Official Says Brexit Would Stun Churchill
Newsmax
"The top Brexit official at the European Parliament thinks British political giants such as Winston Churchill and Margaret Thatcher would not look kindly on Prime Minister Theresa May turning over the hourglass on her country's withdrawal from the European Union.
...
Verhofstadt, who will be closely involved in the exit negotiations as the main representative of the European Parliament, insisted that May's six-page letter triggering the talks carried an underlying message of regret.
'You ask yourself, after you have read the letter 'Why is Britain going outside the European Union?' Because in every chapter, in every chapter of the letter she defends the European Union and: 'Oh, it was so good, but OK, we have to go out.''"
Snippets from the Left
Pillars of the West Shaken by ‘Brexit,’ but They’re Not Crumbling Yet
New York Times
"On a day that blended dull ritual with undeniable historical import, Britain formally began its departure from the European Union with the delivery of a letter to Brussels, followed by lofty words from Prime Minister Theresa May in Parliament.
Two years of grinding divorce negotiations now begin, with the outcome unclear, except that the talks are certain to be contentious and spiteful — and that the only sure winners will be lawyers and trade negotiators.
...
When Britons voted last June to leave the European Union, the champions of “Brexit” argued that the country, with its exit, was at the front edge of a larger populist wave. Months later, the election of Donald J. Trump as president of the United States only deepened the feeling that an anti-establishment political contagion was sweeping across Western democracies, upending the established order. Britain, the argument went, would be a winner in this new era."
Discover more on this topic on AllSides.
Brexit, United Kingdom, Great Britain, Theresa May, Story Of The Week, News