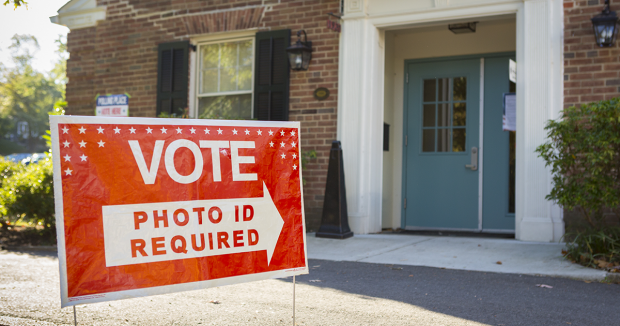 About 77% of Americans agree that photo ID should be required when voting in U.S. elections, according to a recent survey conducted by AllSides.

While most Republicans and Independents are in favor of photo ID laws, Democrats are split on the issue. Results show that 15% of Democrats strongly agree with requiring photo ID to vote, compared to 89% of Republicans.

Seventy-eight percent of Democrats believe that requiring photo ID to vote would decrease voter turnout in U.S. elections, compared to 12% of Republicans. This stark difference between parties may be best explained by the percentage of Democrats who believe that there are barriers to obtaining photo ID (59%) and the number who believe voter suppression was a problem in the 2020 election (68%).

Just 13% of Republicans believe voter suppression was a problem in the 2020 election, and 15% believe that there are some barriers to obtaining photo ID.

The perception of voter fraud in U.S. elections has a tremendous impact on one’s support of photo ID requirements.

Over 99% of respondents who believe that voter fraud is a problem also agree that photo ID should be required to vote. This same set of respondents also believe fraud is more prevalent when voting by mail (83%) than in-person (1%). Nineteen percent say they think fraud occurs at about the same rate.

Overall, Democrats were less likely to believe that voter fraud was a problem in 2020 (a mere 3% believe it was a problem) than Republicans (75%). 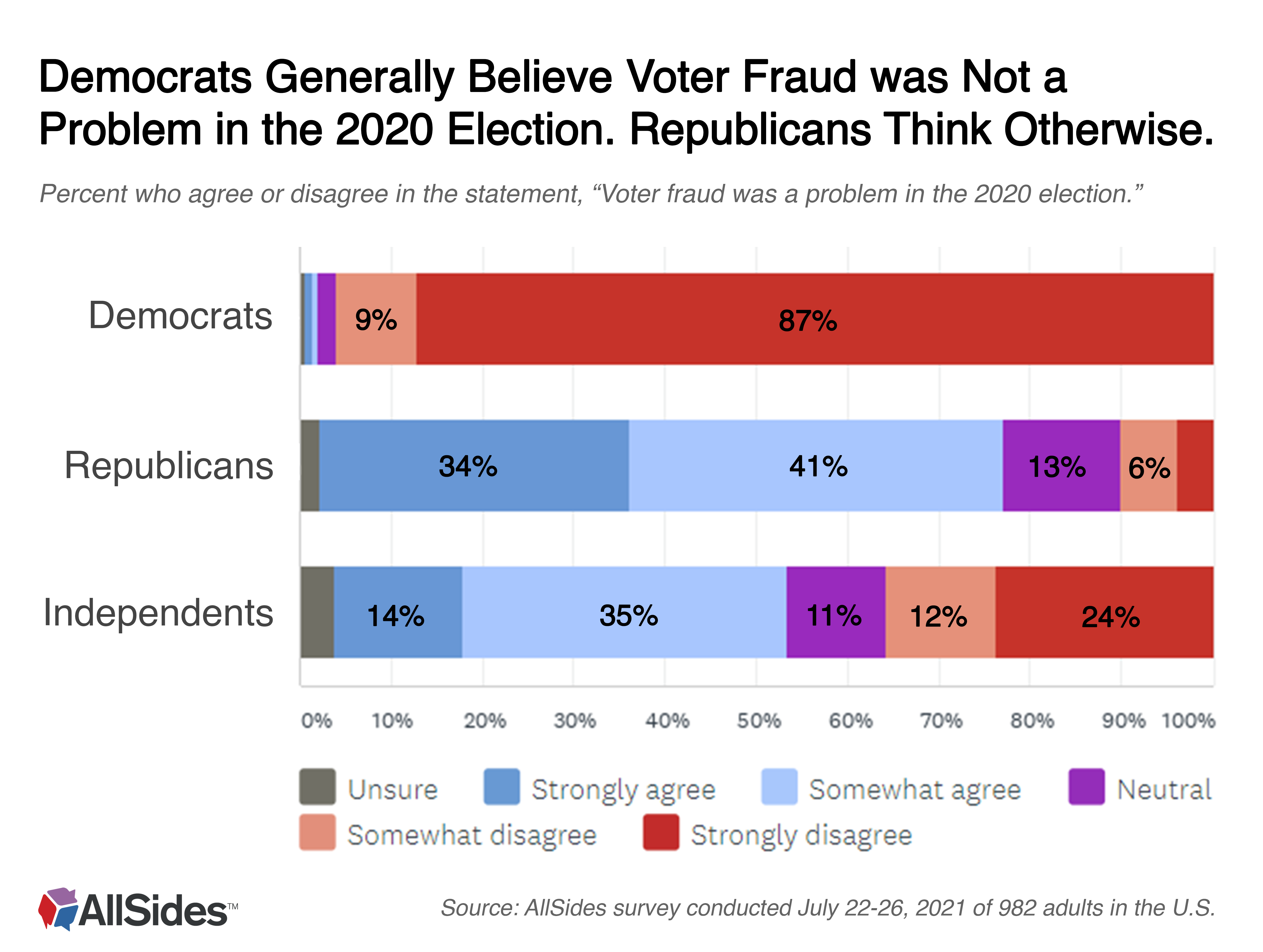 Nearly two-thirds of all respondents say that Joe Biden fairly won the 2020 election (63%). Just one-third of Republicans agree (33%). Similar in nature, a Monmouth University poll conducted in June found that 32% of Americans believe that Biden won the 2020 election “due to voter fraud.” 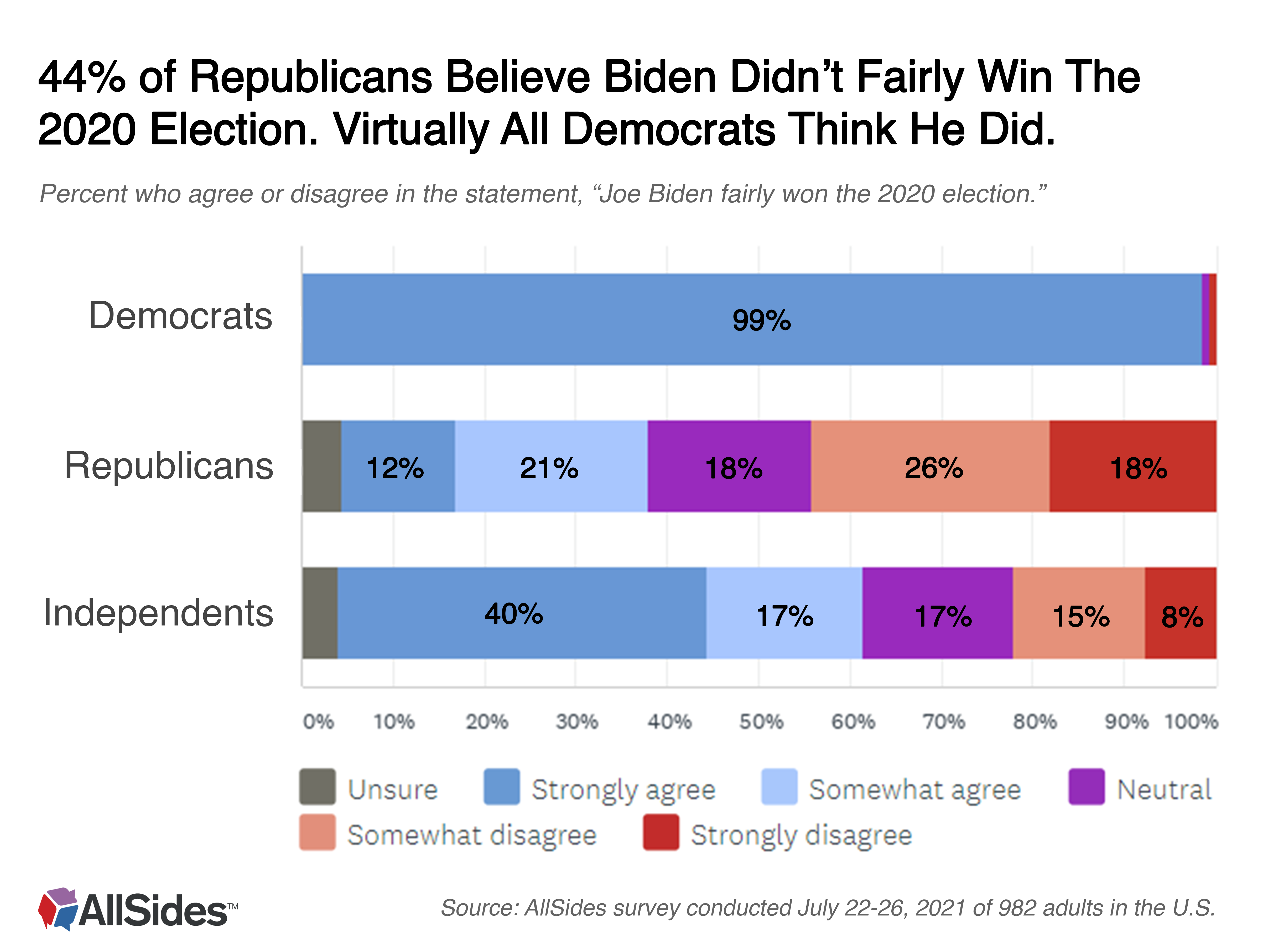 Of respondents who are generally against photo ID requirements to vote, 95% believe that a requirement would decrease voter turnout, an argument held by many opponents of photo ID as a system of suppression against individuals who don’t have an ID.

Many states, including Iowa, South Carolina, Wisconsin, Mississippi, Rhode Island, and Missouri, allow eligible voters to obtain a free photo ID if they don’t have one. In many cases, other forms of identification (e.g. a birth certificate) is required to get a photo ID.

Respondents who believe in requiring a photo ID to vote are generally in agreement: 89% say that “if photo identification is required to vote, obtaining a photo identification should be made free and accessible to all eligible voters.” A slight majority (54%) also say that “eligible U.S. citizens should be automatically registered to vote when they turn 18 years of age.” And while Republicans generally agree that obtaining a photo ID should be free and accessible (85% in favor), they are divided on automatic voter registration (44% in favor, 36% against, 20% neutral or unsure).

Pew Research (Center bias) conducted a similar study in 2016, which found that about 37% of registered voters were wrong in believing that photo ID is required to vote in their state, when in reality it is not needed.

What is the driving factor behind this difference? Many states request that voters show a photo ID when voting, but as of August 2021, just seven states strictly require it. A “strict” requirement in this sense is one where voters without a photo ID must take additional steps after Election Day for their ballot to be counted, such as having to visit their local election office to present an acceptable ID for a provisional ballot to count.

Most states that have voter identification laws don’t do this. Most that request photo ID to vote also allow some voters – particularly those who say they don’t have the appropriate documents – to cast a ballot using another form of identification.

For example, a majority of respondents living in a few states, such as Arizona, Ohio, and Utah, incorrectly believed that their states require photo ID, when in reality other forms of non-photo identification (e.g. a utility bill or bank statement) are accepted as well.

Opinions on What Types of ID Should Be Accepted to Vote

The AllSides survey asked respondents who favor photo ID requirements what they think should be considered approved types of photo ID. A large majority of respondents believe that a driver’s license (98%), passport (97%), military-issued ID (95%), voter ID card (83%), or a Native tribal ID (78%) should be allowed. Less than half say a concealed-carry weapon permit (39%), college ID (33%), hunting license (20%), or company ID (15%) should be allowed.

Most respondents who believe that photo ID to vote should be required say that no forms of non-photo identification should be accepted under any circumstance (63%). This opinion is in line with just a small handful of states in the U.S. that strictly require photo ID to vote, which do not allow some voters without acceptable photo ID to cast a ballot on Election Day. Types of original non-photo identification that some respondents were comfortable with include a birth certificate (32%), Social Security card (31%), or a government-issued marriage certificate (13%). Just 11% agreed with displaying a utility or phone bill.

So far in 2021, dozens of states have introduced bills relevant to voter ID requirements, according to Ballotpedia (Center). Many are aimed to require or request voters show a form of ID, some provide voter ID cards at no cost to voters, and others make substantial changes to absentee voting.

This survey was conducted online between July 22-26, 2021 of 982 U.S. adults, an overwhelming majority (95%) of whom voted in the 2020 presidential election. Margin of error ±4 percentage points overall; larger (up to ±7 percentage points) for subgroups. Data were normalized, meaning that respondents’ political affiliation were adjusted on a scale to line up with the U.S. Population (27% Democrat, 43% Independent, 26% Republican), according to recent survey data from Gallup (Center). The respondents opted-in through AllSides’ social media, website, and email channels, thus are not to be interpreted as a representative sample of the American public. For questions regarding this survey, please contact Andrew Weinzierl, AllSides’ Research Assistant and Data Journalist, at andrew@allsides.com

This piece was reviewed by Managing Editor Henry A. Brechter (Center bias) and Julie Mastrine, Director of Marketing (Lean Right).