About 14.9 million excess deaths were directly or indirectly associated with the COVID-19 pandemic in 2020 and 2021, according to a World Health Organization analysis released Thursday.

The WHO’s estimate was almost three times greater than the reported 5.4 million deaths directly attributable to COVID-19 during the first two years of the pandemic. Deaths indirectly associated with the pandemic included deaths “due to the pandemic’s impact on health systems and society.” In a statement, WHO director-general Tedros Adhanom Ghebreyesus called on countries to “invest in more resilient health systems that can sustain essential health services during crises, including stronger health information systems.”

India, which the report says accounted for 4.7 million excess deaths, delayed the report’s release in January by objecting to the WHO’s methodology. India’s official excess death count for 2020 and 2021 was just 481,080.

While coverage was widespread and balanced across the spectrum on Thursday, right-rated outlets were less likely to feature the story prominently on homepages. Several headlines across the spectrum potentially misled readers by framing the 15 million figure as a “COVID-19 death toll” instead of as “deaths associated with” the pandemic. 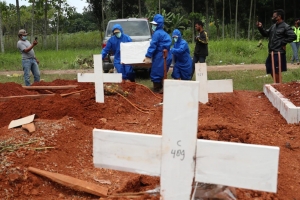 The coronavirus pandemic led to nearly 15 million excess deaths worldwide, according to a new estimate by the World Health Organization, including people who died from covid-19 and others who died from other causes related to the crisis, such as health care shortages as the virus surged and overwhelmed hospitals.

The WHO defines excess deaths as “the difference between the number of deaths that have occurred and the number that would be expected in the absence of the pandemic based on data from earlier years.”

Read full story
Some content from this outlet may be limited or behind a paywall.
See full media bias rating for Washington Post
From the Right
13320
Coronavirus
WHO: COVID-19 death toll nearly 15 million, over double previous estimate
Washington Examiner 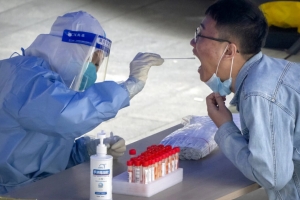 New figures from the World Health Organization Thursday estimate that around 14.9 million people died "directly or indirectly" from the COVID-19 pandemic in 2020 and 2021, more than double the previously reported death toll.

The estimate is focused around "excess mortality" as a result of COVID-19, meaning deaths caused directly by the virus and indirect deaths, such as people with cancer unable to receive treatment due to overcrowded hospitals. The lack of "reliable" death reporting methods in certain countries contributed to the rise, the WHO said.

Read full story
Some content from this outlet may be limited or behind a paywall.
See full media bias rating for Washington Examiner
From the Center
13320
Coronavirus
WHO: Nearly 15 million died as a result of Covid-19 in first two years of pandemic
STAT 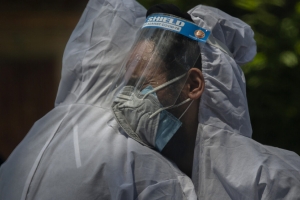 Nearly 15 million people died as a result of Covid-19 in the first two years of the pandemic, the World Health Organization estimated in a report released Thursday. That figure is 2.7 times higher than the 5.4 million deaths that governments around the world reported to the global health agency for that period.

The WHO analysis used mathematical modeling to calculate “excess mortality” for 2020 and 2021 — ascribing to the pandemic deaths that were over and above what had been seen in the years leading up to the emergence...