For Context: Paul Pelosi was hospitalized Friday after being attacked by a home intruder who appeared to be looking for Nancy.

Key Quotes: Senate Majority Leader Chuck Schumer (D) tweeted Friday that "I spoke with Speaker Pelosi earlier this morning and conveyed my deepest concern and heartfelt wishes to her husband and their family, and I wish him a speedy recovery." Senate Minority Leader Mitch McConnell (R) tweeted that he was "Grateful to hear that Paul is on track to make a full recovery and that law enforcement including our stellar Capitol police are on the case."

Where People Agree: Condemnations of the violence were echoed by politicians and opinion writers across the political spectrum.

Where People Disagree: Some right-rated writers, such as Rich Lowry, criticized attempts to blame the attack on right-wing extremism stemming from the Jan. 6, 2020 Capitol riot, arguing that "if Republicans can’t run negative ads against Pelosi for fear that a lunatic will break into her house at 2 a.m., they can’t run negative ads against anyone." Conversely, one writer for CNN tied the attack to "toxic, widely-tolerated social media content" directed at women, and highlighted how some Jan. 6 rioters ransacked Nancy Pelosi's office and called out, "Where are you, Nancy?"

House Republican says both parties need to tone down political rhetoric, ‘myself included’
The Hill 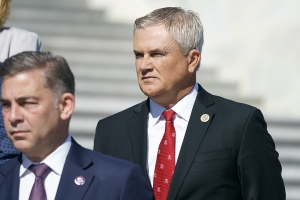 Rep. James Comer (R-Ky.) said on Saturday that both Democrats and Republicans need to tone down their political rhetoric in response to questions about the role of GOP rhetoric in the attack on Paul Pelosi, the husband of House Speaker Nancy Pelosi (D-Calif.), on Friday.

During an appearance on “CNN Newsroom,” Comer, the ranking member of the House Oversight and Reform Committee, told anchor Pamela Brown that the rhetoric from both parties has grown worse over the years.

“I condemn any attack of political violence from anyone of either party. It’s wrong,” Comer told Brown. “I’ve...

A nutjob viciously attacked the elderly husband of the speaker of the House.

That’s godawful, and every person of good will should wish Paul Pelosi a rapid and full recovery and the very best to his family.

Of course, it’s not enough to leave it at that. The press and Democrats have brushed right by the evidence of the attacker’s mental illness and portrayed the assault as a quasi-MAGA operation. It’s supposedly an extension of the political campaign against Speaker Pelosi, or the inevitable fruit of right-wing election denialism, a kind...

An intruder broke into the California home of House Speaker Nancy Pelosi early Friday and attacked her husband Paul Pelosi with a hammer while she was in Washington, DC. Paul Pelosi underwent surgery “to repair a skull fracture and serious injuries to his right arm and hands,” but is expected to make a full recovery, according to a statement released by the speaker’s office.

The suspected attacker, David DePape, who has a history of sharing conspiracy theories on social media, said he would wait “until Nancy got home,” according to a source briefed on the...