A U.S. military drone strike killed two “high profile” Islamic State militants and injured another on Friday night in Afghanistan's Nangarhar province, according to the Pentagon. The attack was conducted in response to the suicide bombing at the airport in Kabul, which killed 13 U.S. service members and at least 170 other people. During a Pentagon press conference on Saturday morning, Maj. Gen. Hank Taylor described the targets killed as “facilitators” and “planners.” Pentagon press secretary John Kirby said the names of the drone strike targets nor their involvement in the attack would be released. It was also stated that the strike killed no civilians. ISIS-K, otherwise known as the Islamic State-Khorasan, previously claimed responsibility for Thursday's suicide bombing.

The news was prominently covered across the spectrum. Left-rated outlets were more likely to highlight how the Pentagon acknowledged the possibility that some of the people that died during the bombing may have been killed in gunfire by American service members after the explosion. Right- and center-rated outlets were more likely to mention that an ISIS-K commander told CNN's Clarissa Ward that the terrorist group was planning the strike for over two weeks; many on the right also focused on and mourned the fallen Americans soldiers. 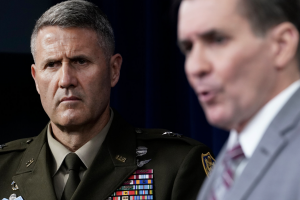 The Pentagon said that two Islamic State militants were killed and one was wounded in Friday night’s drone strike in Nangahar Province as part of the American retaliation for the suicide bombing at the Kabul airport that killed scores of people, including 13 American service members.

Defense Department officials said one of the Islamic State drone targets was a “planner,” and one was a “facilitator.” Both, they said, were involved in planning attacks against Americans, although officials at a news conference on Saturday declined to say whether they were involved...

Read full story
Some content from this outlet may be limited or behind a paywall.
See full media bias rating for New York Times (News)
From the Right
5228
ISIS
US Airstrike Kills 2 ISIS-K Members in Afghanistan
Newsmax (News)

Acting swiftly on President Joe Biden's promise to retaliate for the deadly suicide bombing at Kabul airport, the U.S. military said it used a drone strike to kill two members of the Islamic State group's Afghanistan affiliate and injured one.

Pentagon spokesman John Kirby described the dead as "ISIS-K planners and facilitators," but would not confirm they were involved in the suicide bomibing.

Read full story
Some content from this outlet may be limited or behind a paywall.
See full media bias rating for Newsmax (News)
From the Center
5228
ISIS
Drone Strike Against ISIS-K Killed 2 High-Profile Targets, Pentagon Says
NPR (Online News) 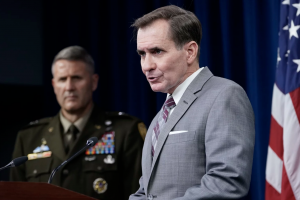 Two targets were killed and another person was injured in a drone strike against the Islamic State affiliate ISIS-K in retaliation for the Kabul airport attack, the Pentagon now says. And the Department of Defense has released the names of the U.S. troops killed in Thursday's attack.

Department officials announced Friday evening that a drone strike killed an ISIS-K target in the Nangarhar province of Afghanistan. On Saturday, officials updated that to say that two "high-profile" targets — described as "a planner and a facilitator" — were killed and one other person from the terrorist...