The Russian Navy's flagship in the Black Sea, Moskva, sunk Thursday after an explosion severely damaged the ship.

Ukrainian officials say the ship was badly damaged by Ukraine's Neptune missiles. The vessel's crew was forced to evacuate after a fire detonated ammunition aboard, according to Russia's defense ministry. Earlier reports about the ship's fate were conflicting; Ukrainian officials first said the boat capsized and began to sink Thursday morning, while Russia said the vessel was being towed back to port. Pentagon Press Secretary John Kirby confirmed an explosion, but says the U.S. does not know at this time if the ship was hit by a missile.

Reports across the media spectrum highlighted voices who said that losing the ship would hit the Russian navy hard and hurt national pride, as Russia's invasion of Ukraine approaches its third month. Updated 4/14 at 6:20 p.m. ET with mention of the ship's sinking. 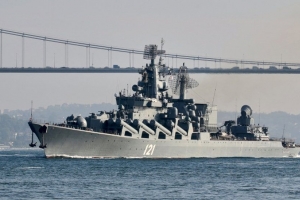 The defence ministry said ammunition on the Moskva exploded in an unexplained fire, but that the 186-metre (610 foot) vessel was still afloat.

Ukraine claims it struck the vessel with its Neptune missiles.

The 510-crew warship has led Russia's naval assault on Ukraine, making it an important symbolic and military target.

Earlier in the conflict the Moskva gained notoriety after calling on Ukrainian border troops defending Snake Island in the... 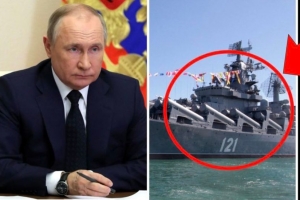 Ukraine has claimed to have landed a massive blow against a major Russian warship.

The Russian guided-missile cruiser Moskva suffered serious damage after an unknown incident while in the Black Sea, and there are competing stories, according to CNN.

“In the Black Sea operational zone, Neptune anti-ship cruise missiles hit the cruiser Moskva, the flagship of the Russian Black Sea Fleet — it received significant damage. A fire broke out. Other units of the ship’s group tried to help, but a storm and a powerful explosion of ammunition overturned the cruiser... 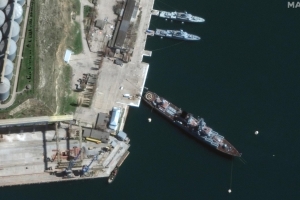 One of the Russian Navy's most important warships has been badly damaged in the Black Sea, a massive blow to a military struggling against Ukrainian resistance 50 days into Vladimir Putin's invasion of his neighbor.

Russian sailors evacuated the guided-missile cruiser Moskva, the flagship of its Black Sea fleet, after a fire that detonated ammunition aboard, Russia's defense ministry said.

Ukraine's Operational Command South claimed Thursday that the Moskva had begun to sink after it was hit Ukrainian Neptune anti-ship missiles.