Former President Donald Trump unveiled his new website “From the Desk of Donald J. Trump" Tuesday; the new website gives Trump a platform to share statements with the public after his ban from Twitter and Facebook. The website created a Twitter account called @DJTDesk, which was suspended by Twitter Wednesday evening. Twitter told the New York Post, “As stated in our ban evasion policy, we’ll take enforcement action on accounts whose apparent intent is to replace or promote content affiliated with a suspended account.” On Wednesday, Facebook’s Oversight Board upheld Trump’s ban on Facebook and Instagram, but added that it was “not appropriate” for Facebook to impose the “indeterminate and standard less penalty of indefinite suspension.” In response, Trump stated Wednesday that “Free Speech has been taken away from the President of the United States because the Radical Left Lunatics are afraid of the truth, but the truth will come out anyway, bigger and stronger than ever before."

Coverage from left-and center-rated outlets tended to focus on the details of Trump's ban earlier in the year and on the Facebook decision. Some coverage from right-rated outlets focused on Twitter and Facebook's respective history of removing posts and suspending accounts that they claim violate their terms. 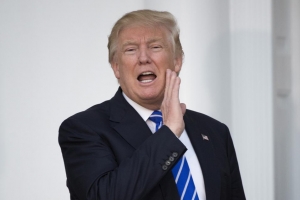 Twitter has suspended an account created to share posts from a website recently launched by former President Donald Trump, claiming the new handle is an attempt to bypass the suspension of his personal account, in the latest move by a major social media company limiting Trump’s ability to spread his message.

The new site, “From the Desk of Donald J. Trump,” went live Tuesday, as did its accompanying Twitter handle, @DJTDesk.

By late Wednesday night, the account had been suspended. 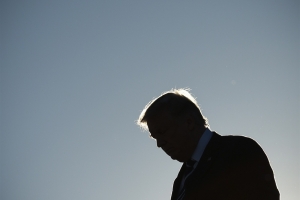 Twitter suspended an account on Thursday that appeared to be circumventing its ban on former President Donald Trump by posting messages he shared on his own website.

The move was more evidence that the social media behemoth will continue to take action to enforce its ban on Trump, which was instituted in his final days in office as he tried to overturn his election defeat.

On Thursday morning, a Twitter accounts with the handle “@DJTDesk” appeared on Twitter. The account’s bio section stated that the handle would be featuring “Posts... 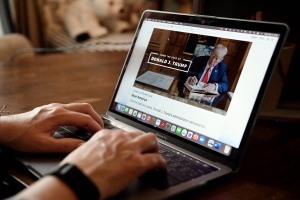 An account pulled from Twitter for appearing to belong to former President Donald Trump’s newly launched communications platform was not created by the ex-commander-in-chief’s team, The Post has learned.

The 45th president on Tuesday revealed his new website, “From the Desk of Donald J. Trump,” which allows him to provide his thoughts in Twitter-style posts that can then be shared on social media sites from which he has been banned.

The site is meant to serve as “a place to speak freely and safely,” a statement from Team Trump said....

Former Trump White House counsel Don McGahn and his wife received disclosures from Apple last month that their account records were sought by the...

China’s Ministry of Commerce said Thursday that a U.S. move to revoke the Trump administration’s executive orders intended to ban apps like TikTok and WeChat...

President Biden is revoking the Trump administration orders that sought to ban TikTok, WeChat and other Chinese apps and replacing it with a new security...

Shadow bans, fact-checks, info hubs: The big guide to how platforms are handling misinformation in...

Big Tech CEOs have become a regular sight on Capitol Hill, called in time and time again to testify before Congress about their...

By naming tech critic Lina Khan to chair the Federal Trade Commission Tuesday, the White House made clear it is dead serious about antitrust...

On June 8, a bipartisan group of senators released a report on the security and intelligence failures related to the Jan. 6 attack on the U.S. Capitol. The...

Southwest Airlines grounded flights across the country Tuesday for the second time in less than 24 hours, amid reports of nationwide computer issues. Air...