Social media companies Twitter and Facebook are facing criticism and questions about their policies after each platform limited circulation of the New York Post's controversial story on Joe Biden's alleged corrupt foreign business dealings this week. Twitter then announced changes to its policy on handling "Hacked Materials", saying it will now "label Tweets to provide context instead of blocking links from being shared." Accusing the companies of censoring information to help Biden win the 2020 election, Senate Republicans are reportedly preparing subpoenas of Facebook CEO Mark Zuckerberg and Twitter CEO Jack Dorsey. The Federal Communications Commission (FCC) also announced its plan to review Section 230 of the Communications Act, citing "bipartisan support in Congress to reform the law; Section 230 protects social media companies from liability for the content posted to their platforms.

The news is being covered on all sides of the spectrum, with more prominent attention from right-rated outlets. Right-rated reports are focused on the companies' alleged efforts to influence the election and harm Trump; outlets on all sides concentrated on how tech companies potentially have excess regulatory power over speech and ideas. 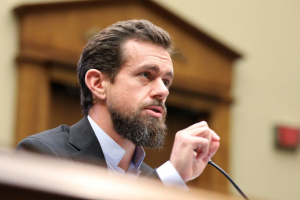 The Senate Judiciary Committee plans to issue a subpoena on Tuesday to Twitter Inc. Chief Executive Jack Dorsey after the social-media company blocked a pair of New York Post articles that made new allegations about Democratic presidential nominee Joe Biden, which his campaign has denied.

The subpoena would require the Twitter executive to testify on Oct. 23 before the committee, according to the Republicans who announced the hearing.

GOP lawmakers are singling out Twitter because it prevented users from posting links to the articles, which the Post said were based...

A Twitter official announced Thursday night that Twitter will be making changes following the firestorm of backlash after it censored two bombshell New York Post stories.

The first story on Wednesday indicates that Hunter Biden monetized foreign companies’ access to Joe Biden while the latter was vice president. The second story alleges that Hunter pursued business deals with one of China’s largest energy companies in an attempt to cash in “for me and my family.”

The Trump administration is once again trying to force social media platforms to do its bidding. This time, the Federal Communications Commission (FCC) has been tapped to use a law called Section 230 to prevent websites from moderating content in a way that many conservatives believe is biased against them. Despite the law being designed to prevent FCC intervention — and the FCC itself using that as justification not to regulate the internet just a few years ago — it appears the agency is going to try.

For four years, Facebook has promised to curb the spread of disinformation, but new data shows that it has failed miserably Its most recent challenge was...

The Trump administration is once again trying to force social media platforms to do its bidding. This time, the Federal Communications Commission (FCC) has...

FCC will move to regulate social media after censorship outcry

Partisans in the U.S. increasingly divided on whether offensive content online is taken seriously...
DATA

Americans are divided on whether offensive content online is taken seriously enough and on which is more important online: free speech or feeling safe....

With an election looming and no end in sight for COVID-19, Americans admit to reading news they don...
ANALYSIS

More than 80% of Americans say they believe the spread of misinformation is a major problem this election year, yet many people frequently read articles from...

The Senate Judiciary Committee plans to issue a subpoena on Tuesday to Twitter Inc. Chief Executive Jack Dorsey after the social-media company blocked a pair...

Anti-abortion group fighting back after university senators say their opinions are 'hateful,...

Students for Life of America (SFLA) is seeking to obtain recognition from the University of Northern Iowa (UNI) after its student Supreme Court argued the anti...

'Where Would the Black Lives Matter Movement Be Without the Right To Free Speech?'

Saturday night, the New York Post revealed that Twitter employees have a heavy bias against Trump. They hate him. In fact, 90 percent of political donations...

A lockdown on dissent
OPINION

It’s not just pubs, restaurants and gyms that are being shut down in response to an increasing number of people testing positive for coronavirus. Debate is...