President Donald Trump released a memorandum Tuesday seeking to exclude people who are in the U.S. illegally from being counted in the upcoming 2020 census. Since the 1970s, U.S. residents have been counted in the census regardless of their immigration status. The population count determines federal funding and the number of seats allotted to each state in Congress. The memo stated that giving congressional representation to those who enter or stay in the country illegally, "would create perverse incentives and undermine our system of government."

Coverage from all sides of the political spectrum speculated about how this change could affect congressional representation in certain states. Some voices from the left said they considered the plan unconstitutional, calling it an effort by Trump to "make the electoral college more red". Editor's note: we initially described the memorandum in error as an executive order. 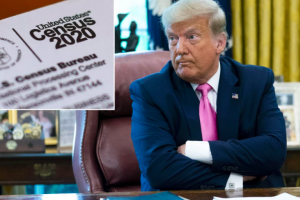 WASHINGTON — President Trump on Tuesday signed an executive order excluding illegal immigrants from being counted in the 2020 United States census.

Since the first census in the 1970s, both US citizens and non-citizens have been included in the country’s official population count, regardless of their immigration status, as part of a process which determines federal funding and how many seats each state gets in Congress.

But Trump’s order, which had been anticipated for weeks, is the latest salvo in his administration’s ongoing battle with the Census Bureau.

Donald Trump’s new memorandum to exclude undocumented immigrants from the next round of congressional apportionment is morally repulsive, illegal, and impossible. It is repulsive because it borrows the logic of the notorious Three-Fifths Clause to declare that undocumented immigrants are not full “persons” under the Constitution. It is illegal because it seeks to exclude these immigrants from a state’s population when counting how many seats each state gets in the House of Representatives, which violates the Constitution. And it is impossible because there is no way that the government can...

WASHINGTON (Reuters) - President Donald Trump plans to sign an executive order on Tuesday that aims to prevent migrants who are in the United States illegally from being counted when U.S. congressional voting districts are redrawn in the next round of redistricting.

President Trump on Thursday extended a pandemic-era suspension of certain immigrant and work visas, ensuring that his sweeping limits on legal immigration will...

The Census Bureau announced it will miss Thursday's deadline to produce the population count used to divide seats in Congress between the states. The...

What the data say about border closures and COVID spread

As countries in Europe rush to close their borders to the United Kingdom to prevent transmission of a new — and potentially more transmissible — variant of...

U.S. immigration arrests down 27% in 2020, a trend activists hope Biden will continue

U.S. immigration arrests fell by 27% in 2020 as the coronavirus pandemic led to fewer border crossings and reduced operations, a falloff that pro-immigrant...

A judge blocked a set of Trump administration asylum rules from going into effect. U.S. District Judge James Donato in San Francisco on Friday ruled against...

The US Census Bureau is not expected to meet a year-end deadline for turning in figures used to apportion congressional seats, according to a report Wednesday...