A Texas abortion law that bans abortions once a fetal heartbeat is detected took effect Wednesday after the Supreme Court decided not to act on an emergency petition filed by abortion providers to stop the measure. The Heartbeat Act (SB 8) bans abortions around the six-week mark, and allows individuals to sue anyone suspected of helping a woman get an abortion.

The law allows for a exemption for "medical emergencies," but does not provide an exception for rape or incest.  It is one of most restrictive abortion bans in the United States. Critics argue that many women don't yet know they're pregnant at the six-week mark; Texas state Sen. and sponsor of the bill Bryan Hughes (R) called it “the most powerful pro-life legislation in Texas history.” 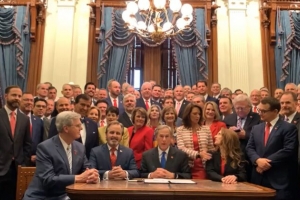 A Texas law that bans most abortions took effect on Sept. 1 after the Supreme Court did not respond to an emergency motion that asked it to block the law.

Senate Bill 8 bars doctors from performing abortions unless he or she has tried detecting a fetal heartbeat. Only if a heartbeat is not detected can the doctor perform an abortion, unless a medical emergency exists.

The legislation explicitly forbids state officials from enforcing it. Instead, private citizens—except for an individual who impregnated a woman through rape or incest—may file lawsuits against doctors, clinics, and anyone involved...

Read full story
Some content from this outlet may be limited or behind a paywall.
See full media bias rating for The Epoch Times
From the Center
280
Abortion
Unprecedented Texas abortion ban goes into effect
Axios 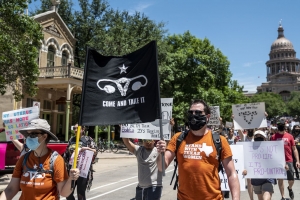 A law that bans abortions after six weeks, including in cases of rape and incest, went into effect in Texas on Wednesday.

Why it matters: The law, one the most restrictive abortion bans in the U.S., prohibits the practice after a fetal heartbeat is detected — before many people know they are pregnant.

It also incentivizes individuals to sue anyone suspected of helping a woman obtain an abortion — and awards at least $10,000 to people who do so successfully.

A controversial Texas law that bars abortions at six weeks went into effect early Wednesday morning after the Supreme Court and a federal appeals court failed to rule on pending emergency requests brought by abortion providers.

The lack of judicial intervention means that the law -- which is one of the strictest in the nation and bans abortion before many people know they are pregnant -- goes into force absent further court intervention.

The law allows private citizens to bring civil suits against anyone who assists a pregnant person seeking an abortion...