The Supreme Court struck down New York’s concealed-carry law for handguns on Thursday, arguing its permit requirements violated a general right to carry a handgun outside of the home for self defense.

The 6-3 ruling, split between the court’s conservative majority and liberal minority, was widely described as “one of the biggest gun rights cases in over a decade.” In a 63-page majority opinion, Justice Clarence Thomas specifically took issue with the New York law’s “proper cause” requirement — which requires citizens to demonstrate a special self defense need to acquire a concealed-carry permit — writing, “We know of no other constitutional right that an individual may exercise only after demonstrating to government officers some special need.”

Justices Alito, Kavanaugh and Barrett each wrote separate concurring opinions. Justice Breyer wrote the liberal justices’ 52-page dissenting opinion, arguing the majority’s decision was made “without allowing for discovery or the development of any evidentiary record, without considering the State’s compelling interest in preventing gun violence and protecting the safety of its citizens, and without considering the potentially deadly consequences of its decision.”

Coverage was widespread across the spectrum, often noting the ruling could threaten gun permit laws in several other states. Coverage from the left often framed the decision as “expanding” gun rights, and coverage from the right often framed it as striking down “restrictions” and “regulations.” 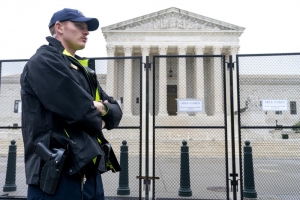 In a major expansion of gun rights, the Supreme Court said Thursday that Americans have a right to carry firearms in public for self-defense, a ruling likely to lead to more people legally armed in cities and elsewhere. The ruling came with recent mass shootings fresh in the nation’s mind and gun-control legislation being debated in Congress and beyond.

About a quarter of the U.S. population lives in states expected to be affected by the ruling, which struck down a New York gun law. The high court’s first major gun decision in... 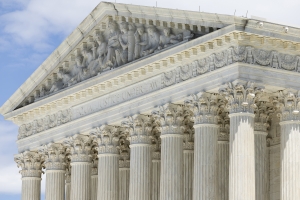 The Supreme Court has struck down New York’s century-old law restricting the carrying of concealed firearms, its first major Second Amendment decision in more than a decade and a ruling that could lead to more guns on the streets.

Writing for the 6-3 majority, Justice Clarence Thomas said Thursday that the law’s requirement of New Yorkers who want a permit to carry a handgun in public to show “proper cause” that the weapon is ​specifically needed for self-defense “violates the Fourteenth Amendment by preventing law-abiding citizens with ordinary self-defense needs from exercising...

The Supreme Court on Thursday struck down a New York handgun-licensing law that required New Yorkers who want to carry a handgun in public to show a special need to defend themselves.

The 6-3 ruling, written by Justice Clarence Thomas, is the court’s first significant decision on gun rights in over a decade. In a far-reaching ruling, the court made clear that the Second Amendment’s guarantee of the right “to keep and bear arms” protects a broad right to carry a handgun outside the home for self-defense. Going forward, Thomas explained,...

Justices Are Not Kings
Slate