Georgia voters will cast their ballots in two special U.S. Senate elections on Jan. 5 that will decide which political party controls the 50-member Congressional body. Incumbent Republican Sens. Kelly Loeffler and David Perdue are facing challenges from Democrats Raphael Warnock and Jon Ossoff; none of the four candidates gained 50% of the vote in the initial election, so state law requires that a "runoff" election — essentially a rematch — be held. With all other Senate races effectively decided, Republicans currently hold 50 seats to Democrats' 48. Wins for Warnock and Ossoff would create a straight 50-50 tie in the Senate, which would make the vice president the tie-breaking vote.

Coverage on all sides has speculated about possible campaign and fundraising tactics to be used between now and January. Many reports focused on the Democrat candidates' calls for more debates, and the incumbents' apparent reluctance to the idea; some coverage also analyzed potential donors and fundraising sources for both parties. 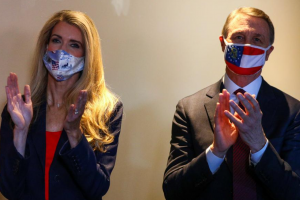 Democratic candidates in a pair of U.S. Senate runoff races in Georgia on Monday challenged the two incumbent Republican senators to debates ahead of a Jan. 5 vote that will decide control of the Senate.

Democrat Jon Ossoff said he had accepted invitations from six media outlets to debates, and urged Republican rival Senator David Perdue to join him in the forums. He had already called Perdue a “coward” on Twitter Sunday following media reports that Perdue had declined a chance to debate on Dec. 6 at the Atlanta Press...

Some very well-known Republicans are teaming up help raise money for the GOP candidates in Georgia’s twin Senate runoff elections, which will determine whether their party holds on to its majority in the Senate or if the Democrats will control both houses of Congress in addition to the White House.

Fox News has confirmed that Republican strategist Karl Rove will serve as national finance chairman for the Georgia Battleground Fund. Rove, who was President George W. Bush’s top political adviser during his two presidential campaigns and in the White House,...

Joe Biden turned Georgia blue. Compared to what they’re up against now, that was the easy part for Democrats.

To repeat Biden’s feat in a pair of Senate runoffs on Jan. 5, with control of the Senate on the line, the Democratic Party will have to defy a long track record of failure in overtime elections. They’ll need to overcome the entire weight of the Republican Party descending on the state — from organizers and operatives to potentially hundreds of millions of dollars. One of their Senate candidates, Jon Ossoff,...

One is a low-key former astronaut who preaches moderation and collaboration. The other is a progressive pastor willing to kill the filibuster to pass a...

Supreme Court expansion was one of the left’s most galvanizing ideas during the 2020 Democratic primary. But the idea is going nowhere with sitting Democratic...

The Senate — in an overwhelmingly bipartisan vote on Thursday — sent Congress’s strongest message yet condemning anti-Asian hate crimes by passing a bill aimed...

Sen. Joe Manchin (D-W.Va.) is headed for a high-profile battle with the Senate’s leading progressives over whether to expand Medicare eligibility as part of...

A debate over ending debate: Explaining the filibuster fight

With the Senate – and the nation – closely divided, frustration over the filibuster has grown. Those in the majority tend to see it as an obstacle to progress...

Republicans say fiscal conservatism simply isn’t the GOP rallying cry it used to be, and that’s making it much harder to counter President Biden’s push for...

Some Democrats Push for Permanent Expansion of Unemployment Benefits

Democrats on Capitol Hill are pushing for the White House to propose more generous and long-lasting jobless benefits on a permanent basis as part of the...

Manchin: I would endorse Murkowski 'in a heartbeat'

Democratic Sen. Joe Manchin of West Virginia didn’t flinch when asked whether he would cross party lines to back his Republican colleague and friend in Alaska’...

Republican Sen. Josh Hawley the only senator to vote against it. It was authored by Hawaii Democratic Sen. Mazie Hirono, and passed amid a spike in hate crimes...

Ahead of the Senate vote on Vanita Gupta’s confirmation to be associate attorney general, Sen. Ted Cruz took one final shot at President Biden’s controversial...

The Senate voted to advance Asian American hate crime legislation on Wednesday despite criticisms from some Republicans that the measure is a messaging bill...