House Speaker Nancy Pelosi has instructed the House Judiciary Committee to draft articles of impeachment against President Trump over his effort to pressure Ukraine to investigate a political rival.

President Trump has asked House Democrats to impeach him quickly so that he can get past the Senate trial and "get back to work."

See Today’s News »   More Headline Roundups »
From the Left
1184
Politics
'The president leaves us no choice': Pelosi to proceed with articles of impeachment
Politico 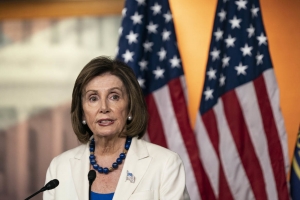 The speaker said investigators have uncovered more than sufficient evidence to show that Trump abused his office.

Speaker Nancy Pelosi announced Thursday that she has asked key chairmen to draft articles of impeachment against President Donald Trump, a historic step that signals the House is increasingly likely to vote to impeach Trump before the end of this year.

“Sadly, but with confidence and humility, with allegiance to our founders, and a heart full of love for America, today I am asking our chairmen to proceed with articles of impeachment,” Pelosi... 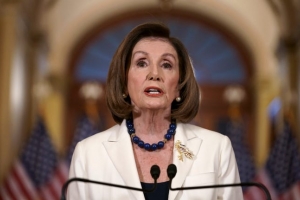 House Speaker Nancy Pelosi said Thursday that Congress had to act in the impeachment inquiry of President Donald Trump because of his failure to faithfully execute the law, a phrase that echoed the reasoning for the Declaration of Independence from England.

“The president abused his power for his own personal political benefit," said Pelosi, D-Calif. "The president's actions have seriously violated the Constitution."

"Today I am asking our chairmen to proceed with articles of impeachment," she added.

Meanwhile, Trump invited House Democrats to impeach him quickly so that he could...

Read full story
Some content from this outlet may be limited or behind a paywall.
See full media bias rating for USA TODAY
From the Right
1184
Politics
Nancy Pelosi: Trump 'leaves us no choice' but to proceed with impeachment
Washington Times 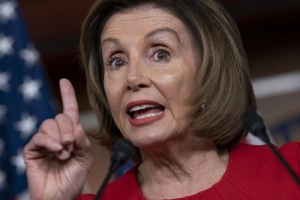 House Speaker Nancy Pelosi on Thursday announced that Democrats would proceed with articles of impeachment against President Trump.

“His wrongdoing strikes at the very heart of our Constitution,” said Mrs. Pelosi, California Democrat.

She formally requested that the House Judiciary Committee move forward with articles of impeachment based on allegations that Mr. Trump abused the power of his office and invited foreign interference in the 2020 election.

“The president leaves us no choice but to act because he’s trying once again to corrupt the election for his own benefit,” she...