Six Injured in Clash Between Free Speech Rally and Counter-Protesters

Six people were injured during clashes between a "Free Speech Rally Against Twitter and Big Tech" and counter-protesters in San Francisco on Saturday. The rally, organized by Team Save America and held at U.N. Plaza near Twitter's headquarters, was protesting Twitter's apparent censorship of the New York Post's article about Hunter Biden's emails allegedly detailing corrupt behavior by his father, Joe Biden. Before the rally, interactions between rally-goers and counter-protesters, some clad in black and holding signs that bore anti-fascist messages, reportedly grew violent. Before the event, main organizer Philip Anderson said he was punched, and tweeted pictures apparently showing his front teeth knocked out.

The story was widely covered by right-rated outlets, who tended to frame the clashes as attacks against free speech and censorship against conservative voices. The story received less coverage overall from left- and center-rated outlets, though it was covered by some including the Associated Press, San Francisco Chronicle, and the Washington Post.

Six Injured in Clash Between Free Speech Rally and Counter-Protesters 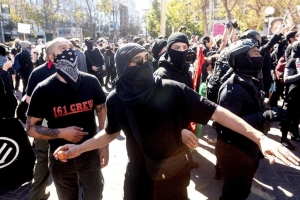 Members of Team Save America organized the event at the United Nations Plaza to protest against Twitter, which they say suppresses free speech. But, the rally was canceled shortly after it started at 1:00 p.m. One of the organizers, Phillip Anderson, lost a tooth after he was punched in the mouth by a counter-protester.

San Francisco police said six people were injured, including three officers, during clashes between a small group of President Trump’s supporters and a larger crowd of counterprotesters Saturday near Civic Center. No arrests had been made by early Saturday evening.

The pro-Trump protest, billed as a free speech rally, drew people from Team Save America wearing “Make America Great Again” hats and carrying pro-police “Thin Blue Line” flags. They set up a stage at the Federal Building at U.N. Plaza, but dozens of black-clad demonstrators quickly gathered to oppose the... 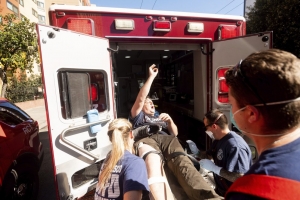 A free speech demonstration staged by conservative activists quickly fell apart in downtown San Francisco on Saturday after several hundred counterprotesters surged the area, outnumbering and attacking those gathered, including knocking one in the mouth.

A photographer working for The Associated Press witnessed an activist with Team Save America taken away in an ambulance and an injured San Francisco police officer on the ground by San Francisco’s United Nations Plaza.

Team Save America organized the rally to protest Twitter, which it said squelches conservative speech.