The House of Representatives will transmit an article of impeachment against former President Donald Trump to the Senate on Monday, and the formal trial will begin in the Senate the week of Feb. 8, Majority Leader Chuck Schumer announced Friday. His announcement of the article's transmission initially appeared to be a denial of Republicans' requests to delay the trial, but he later explained that the Senate would pause the trial until early February once transmitting the impeachment article Monday.

The news was often framed as benefitting both parties by media outlets across the spectrum. Some framed it as a win for the Biden administration based on the extra time it would have to settle in and confirm Cabinet members before a polarizing impeachment trial; others framed it as a win for the GOP, which had originally wanted to delay the trial by several weeks. Some coverage from right-rated sources also focused on President Joe Biden's apparent approval of the delay. Updated 1/22/21 at 6:58 p.m. ET with trial's start date. 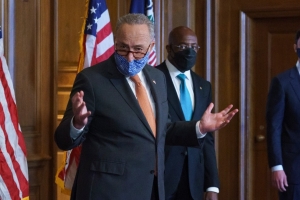 The timeline was sought by Senate Minority Leader Mitch McConnell, who argued that the ex-president’s legal team should be given sufficient time to prepare for the trial.

The House will send the impeachment article, which charges Trump with inciting the Jan. 6 insurrection at the Capitol, on Monday night, and senators will be sworn in on Tuesday. 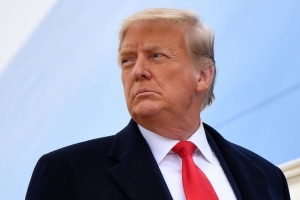 The second impeachment trial of Donald Trump will begin next month after an agreement reached between Senate Democrats and Republicans.

House Democrats will send the impeachment article of "inciting insurrection" to the Senate on Monday.

Arguments will not begin until the week of 8 February, allowing Mr Trump's lawyers two weeks to build a defence.

Democrats accuse the ex-president of instigating the deadly 6 January riot at the US Capitol.

The House of Representatives last week charged Mr Trump with inciting the Capitol violence, paving the way for a Senate... 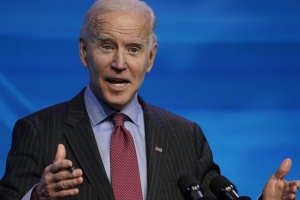 “The more time we have to get up and running to meet these crises, the better," Biden told reporters on Friday at the White House.

After signing two coronavirus economic relief executive orders, Biden said he "hasn't heard the details" of McConnell's proposal to push Trump's trial to mid-February after the House sends the Senate its impeachment article on Monday. The article charges Trump with inciting the Jan....

When Wyoming U.S. Sen. John Barrasso snapped at Deb Haaland during her confirmation hearing, many in Indian Country were incensed. The exchange, coupled...

The Senate parliamentarian has ruled against including the increase in the minimum wage in the Covid relief bill. While Democrats had pushed for the...

Poised to take over a beleaguered Justice Department, Merrick Garland may face his biggest test
ANALYSIS

For Merrick Garland, a well-regarded lawyer and federal judge — and onetime Supreme Court nominee — there was a critical condition under which he’d accept the...

Senate Parliamentarian Elizabeth MacDonough has told senators that the federal minimum wage increase President Joe Biden and Democrats have been seeking would...

Senate Democrats will not be forced to confront an internal political battle over increasing the federal minimum wage to $15 following a decision by the...

Backers of a push to raise the federal hourly minimum wage to $15 suffered a key loss Thursday after a Senate official ruled the controversial measure cannot...

Centrist Sen. Joe Manchin (D-W.Va.) is the most pivotal vote in the evenly divided Senate, and his power could spark prolonged intraparty feuds among Democrats...

Republican Sen. Josh Hawley is putting his weight behind raising the federal minimum wage to $15 an hour — but with a twist. Unlike proposals from Democrats...

President Joe Biden’s nominee for U.S. attorney general, Merrick Garland, said during the first day of his confirmation hearing on Monday that the attacks on...