Scientists Craft Herd Immunity Plan to Reopen Society; Others Say It's Too Risky

A proposal from Dr. Martin Kulldorff of Harvard, Dr. Sunetra Gupta of Oxford, and Dr. Jay Bhattacharya of Stanford — titled the Great Barrington Declaration — seeks to end COVID-19 coronavirus lockdowns and reopen society. The plan focuses on "herd immunity," in which people would purportedly build immunity to the coronavirus without a vaccine; the authors argue lockdowns "are producing devastating effects on short and long-term public health." Dr. Anthony Fauci and other public health experts have dismissed the idea; when asked about the plan at his NBC town hall Thursday, President Donald Trump said in part, "the cure cannot be worse than the problem itself."

Coverage from many left- and center-rated sources framed the plan as a misguided and dangerous proposal to pursue herd immunity, one that could potentially cost thousands of lives. Coverage from right-rated outlets, primarily libertarian ones, painted the plan as a vague but well-intentioned effort to allow healthy people to get back to a sense of normalcy while protecting the most at-risk individuals from the virus.

Scientists Craft Herd Immunity Plan to Reopen Society; Others Say It's Too Risky

From the Right
13742
Life During COVID-19
A Group of Scientists Wants To Reopen Society. Here's What Everyone Is Getting Wrong About What They Said.
Reason 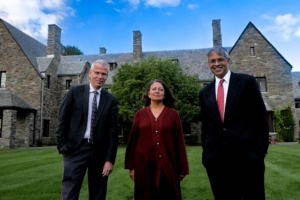 A trio of epidemiologists released a public letter last week rebuking the lockdown-focused approach to combating COVID-19. Their alternative: a model called Focused Protection, outlined in their Great Barrington Declaration, which would reopen society and allow young people to live their lives normally while implementing safeguards for the elderly.

Reactions were predictably polarized, as coronavirus proposals have tended to be. It's been hailed as the "best advice" and condemned as "grotesque." So who's right?

Let's start with the gist of the declaration: "Current lockdown policies are producing devastating effects on...

As the Trump administration signals a willingness to build “herd immunity” by purposely allowing the coronavirus to spread, major scientific organizations are denouncing a plan they say would be life-threatening and practically impossible.

That plan, laid out by three scientists in a controversial document called the "Great Barrington Declaration," calls for only protecting “vulnerable” people and letting everyone else get infected with COVID-19. The authors discussed the strategy in a meeting with two top White House officials last week.

This week, top US heath official Anthony Fauci, the head of...

In a Monday phone call, White House officials cited the Great Barrington Declaration, which argues that the government should push for herd immunity with more infections among the healthy population, according to two senior administration officials.

Supporters of the declaration use it to argue against lockdowns and more reopenings during the pandemic.

More news about Life During COVID-19

The United States broke its record for the highest number of confirmed coronavirus cases reported in a single day on Friday, an alarming sign that what some...

Out of Work in America

A conference call in which everyone on the line was laid off. An email declaring that a restaurant had served its last meal. A phone call from the boss before...

The U.S. Is Having One of Its Worst Coronavirus Weeks Since the Pandemic Began

The U.S. is having one of its worst weeks since the COVID-19 pandemic began, but despite that, few states appear prepared to tighten restrictions to bring the...

Remdesivir Is the First FDA-Approved Treatment for COVID-19

Remdesivir, an antiviral medication given intravenously, is now approved for anyone hospitalized with COVID-19. It works by blocking the virus’s ability to...

The Food and Drug Administration (FDA) on Thursday approved remdesivir for the treatment of hospitalized COVID-19 patients. The antiviral treatment, which...

The U.S. added nearly 84,000 coronavirus cases for the second-straight day, with new infections coming in barely below the daily record set the previous day...

Who's to blame for stalled stimulus talks?

Hopes that Congress might pass another round of economic stimulus before Election Day seem to be fading quickly despite apparent eagerness to reach a deal from...

The U.S. set a new record for new coronavirus cases in a single day Friday as the country undergoes an alarming new surge in infections. According to the...

The 'shocking' impact of COVID-19: Americans, young and old, have lost 2.5 million years...

Stephen Elledge was upset. A world-class molecular biologist and geneticist, Elledge felt like people were ignoring an important aspect of the COVID-19...

The United States is approaching a record for the number of new daily coronavirus cases in the latest ominous sign about the disease’s grip on the nation, as...

The Food and Drug Administration granted approval of remdesivir, an antiviral drug from Gilead Sciences and a treatment for COVID-19. The drug, sold under...

The Department of Health and Human Services announced on Friday that it had partnered with CVS and Walgreens to administer coronavirus vaccines to long-term...