Coverage was mostly from right- and center-rated media, with few reports about the complaint coming from left-rated sources. All coverage noted that members of the U.S. media were led out before they could ask any questions. 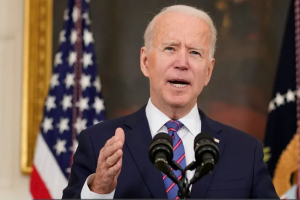 After a brief conversation with Biden that touched on issues ranging from climate change and transport infrastructure to lifting the ban on British beef, Johnson opened the floor for reporters from his home country.

"Would it be okay if we have just a couple of questions, just a couple?" Johnson asked, looking over to Biden, who replied, "Good luck."

After Johnson had taken several... 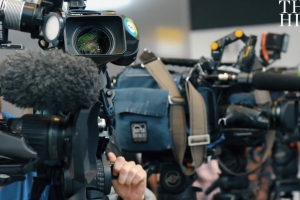 Members of the White House press pool lodged a complaint with the White House after British reporters but not American reporters were recognized for questions during President Biden’s meeting with British Prime Minister Boris Johnson on Tuesday afternoon.

White House Correspondents' Association President Steve Portnoy, who served as the radio pooler on Tuesday, said that the editorial component of the pool went to White House press secretary Jen Psaki to lodge a formal complaint on Tuesday about the lack of questions granted to American reporters.

Biden and Johnson each delivered brief remarks in the Oval Office. Johnson... 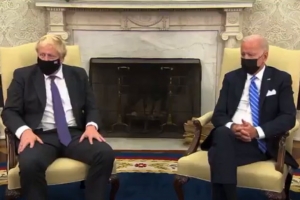 President Joe Biden did not take questions from US reporters during his meeting with UK prime minister Boris Johnson on Tuesday.

Mr Johnson was speaking about the Good Friday Agreement and ensuring nothing the United Kingdom does interrupts the accords with Northern Irelands. Mr Johnson was responding to questions from two British reporters, CBS’s Steven Portnoy reported from inside the Oval Office.

“On that point, Joe, we are completely at one. And I think nobody want to see anything that interrupts or un-balances the Belfast Good Friday,” Mr Johnson was saying before being cut...

For a country that purports to value our First Amendment right to freedom of speech, it has become clear that some of our elected officials don’t understand it...

Google and YouTube on Thursday announced a new policy that prohibits climate deniers from being able to monetize their content on its platforms via ads or...

To the editor: The Los Angeles Police Department is committed to continuing to improve our performance with regard to protests, including documentation of...

Frances Haugen is a former Facebook employee who revealed herself as the whistleblower who provided private research documents to The Wall Street...

Facebook whistleblower goes public with her allegations of deception

A Facebook whistleblower says the social network puts profits over safety, and has handed thousands of pages of internal company documents to federal law...

Dorian Abbot is a geophysicist at the University of Chicago. The Massachusetts Institute of Technology (MIT) invited him to deliver a guest lecture on climate...

Steven Crowder, a conservative YouTuber and political commentator, had his YouTube channel suspended for one week Wednesday for allegedly violating the...