Nevada's Democratic caucus concluded on Saturday with Vermont Senator Bernie Sanders in the lead, former Vice President Joe Biden in second, and South Bend Mayor Pete Buttigieg in third. Though some votes are still being counted and the final margin remains unclear, many outlets have already declared Sanders the victor, having won 46% of the vote with 60% of precincts reporting (Biden is at 19%, while Buttigieg is at 15%).

As outlets on both the left and right point out, the results add to Sanders' win in New Hampshire and popular vote victory in Iowa, and likely cement his status as the Democratic front-runner. News and analysis following the caucus questioned what that means both for the Democratic Party as well as the 2020 presidential race in general.

From the Left
1184
Politics
After the Nevada Blowout, It’s Bernie’s Party Now
Jacobin 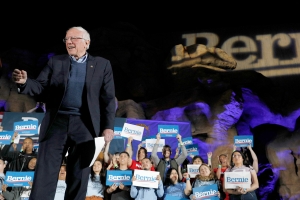 Bernie Sanders’s crushing victory in the Nevada caucuses today is much more than one giant leap toward the Democratic Party nomination.

Sanders is, of course, the favorite to win at the convention in Milwaukee. But a closer look at the numbers and demographics of the “Silver State” reveals something much bigger — the seeds of a new electorate rising up, and a fundamental realignment of US politics. And a new party, thoroughly working-class and committed to egalitarian politics, quickly blooming up into the husk of the old one. 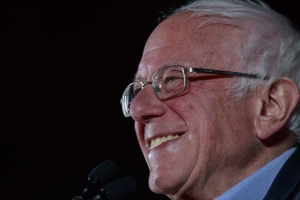 Sanders hasn't locked up the race yet, but he's now in a position to do so. Democrats look very much like they're about to nominate a self-described democratic socialist for president.

There are some hurdles Sanders will have to overcome first—namely the way the large primary field interacts with the complexities of the party's nominating rules. A total of 3,979 "pledged" delegates are...

NEW YORK (Reuters) - U.S. Senator Bernie Sanders, often maligned by opponents as a liberal outsider who cannot unify the Democratic Party, won the party’s Nevada caucuses by a comfortable margin thanks to a diverse coalition of supporters, according to polling agency Edison Research.

Recently, I have heard something disturbing. As we battle against the negative consequences of COVID-19, many voices state that we all must “learn to live...

After lobbying, Catholic Church won $1.4B in virus aid

The U.S. Roman Catholic Church used a special and unprecedented exemption from federal rules to amass at least $1.4 billion in taxpayer-backed coronavirus aid...

Once the money helicopter takes off, it can never again land. It's also why once a country is on the road to socialist utopia, also known as Venezuela or CHOP...