Bari Weiss, a writer and editor for the New York Times' opinion desk, published a resignation letter Monday, citing media bias and a "hostile work environment." Weiss wrote in her letter that she was hired to diversify the New York Times' opinion section, which is rated Left by AllSides, by bringing in first-time writers, centrists, conservatives and "others who would not naturally think of the Times as their home." Instead, Weiss wrote she found that "a new consensus has emerged in the press, but perhaps especially at this paper: that truth isn’t a process of collective discovery, but an orthodoxy already known to an enlightened few whose job is to inform everyone else."

Weiss' letter was embraced by several prominent voices from the right, including Sen. Ted Cruz, Donald Trump Jr., and Ben Shapiro; prominent voice from the left, Bill Maher, also expressed support for Weiss. When it comes to wording, some left-rated outlets framed Weiss as a "controversial" opinion writer in their headlines. Several liberal journalists criticized Weiss' letter, including Linda Tirado, a freelance photojournalist who lost her eye to a rubber bullet in May while covering the street protests in Minneapolis. Tirado contrasted Weiss' concerns about press freedoms to physical attacks on the press in a tweet. 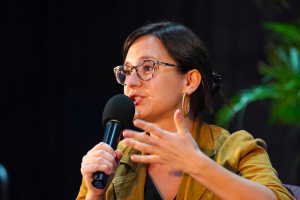 New York (CNN) -- Bari Weiss, a controversial opinion writer for The New York Times, resigned from the newspaper on Monday, blasting the institution on her way out in a scathing letter explaining why she chose to leave her job.

In the resignation letter Weiss posted online Tuesday, the self-described "politically homeless" writer criticized The Times for fostering what she called an "illiberal environment" that she said was "especially heartbreaking."
"Twitter is not on the masthead of The New York Times," Weiss wrote. "But Twitter has become its ultimate...

Bari Weiss, a high-profile editor and writer for the New York Times opinion section, resigned Monday, citing what she said was unchecked bullying from colleagues and depicting the news organization as a place where the free exchange of ideas was no longer welcome.

In a letter to New York Times publisher A.G. Sulzberger which was posted on her website Tuesday, Ms. Weiss wrote that she has been “the subject of constant bullying by colleagues who disagree with my views.”

Many liberal journalists shrugged off the fiery exit of New York Times opinion editor Bari Weiss, some even mocking the writer over the open letter she had penned to the paper's publisher.

While many conservatives rallied behind Weiss after she released the letter detailing the abuse she faced from her Times colleagues and how the Twitter mob "has become its ultimate editor" of the paper, members of the mainstream media were not merely as concerned, some even mocked her.

How the Media Could Get the Election Story Wrong
ANALYSIS

Picture this Thanksgiving: turkey, football (maybe), tenser-than-usual interactions with relatives. And perhaps a new tradition: finding out who actually won...

Chris Wallace Calls Out Joe Biden for Turning Down Interview a Week After Trump Sit-Down: ‘We’ll...

Fox News Sunday anchor Chris Wallace was the object of much praise last week over his big, newsmaking interview with President Donald Trump, but said Sunday...

The narrative of content moderation, especially over the past few months, goes something like this: Extremists and conspiracy theorists peddle misinformation...

Ex-Google Engineer Says Glitch Blocking Websites Including Drudge, Breitbart Could Have Revealed a...

A Tuesday incident in which certain websites briefly vanished from Google search results may have inadvertently exposed an internal list aimed at suppressing...

ed an open letter that decried cable news in general as a “cancer” that “risks human lives.” Pekary’s letter went viral Monday night, August 3, when she...

Producer Ariana Pekary recently resigned from MSNBC with an open letter accusing the news network of predicating its editorial process on ratings and alleging...

Just a few weeks ago the idea of “peaceful riots” would have seemed absurd, but the American media is nothing if not inventive these days. Earlier this week,...

A Breitbart video touting misinformation about the coronavirus has quickly spread across social-media platforms, where clips were retweeted by President Donald...

MSNBC producer Ariana Pekary blasted the network as a “cancer” in an open letter explaining her reasoning for quitting, the New York Post reports. In her...

An MSNBC producer released a scathing open letter after quitting her job — accusing the network of becoming a “cancer” that “blocks diversity of thought” and “...