Idaho Governor Brad Little (R) signed two bills on Tuesday limiting transgender rights in Idaho. One prevents trans women from participating in women's school sports, and the other forbids trans people from changing their original gender identity on their birth certificate. Lawsuits challenging the new rules have reportedly been filed against Little and Idaho. Tuesday was International Transgender Day of Visibility (Trans Day of Visibility), an annual celebration of transgender people and transgender rights around the world. 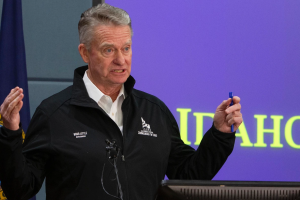 Idaho is facing a pair of lawsuits after its governor signed two of the nation’s harshest anti-transgender bills into law.

On Monday, Republican Gov. Brad Little approved two bills that had been met with widespread opposition. House Bill 500 bans transgender girls from playing on school sports teams in alignment with their gender identity, while House Bill 509 blocks trans people from correcting their birth certificates to match the person they know themselves to be. Forty local and national businesses, including Hewlett-Packard and Verizon, signed onto an open letter opposing...

One bill would ban transgender girls and women from participating in sports that align with their gender identity. The other bill would make it illegal for transgender people to change gender markers on their Idaho birth certificates.

Read full story
Some content from this outlet may be limited or behind a paywall.
See full media bias rating for Idaho Statesman
From the Right
2000
LGBT Rights
Idaho Gov. Signs Law Barring Biological Males, 'Transgenders,' From Female Sports
CNSNews.com

The governor also signed into law another bill that requires birth certificates to record the biological sex of the person at birth, based upon their reproductive anatomy and chromosomes. Birth certificates cannot be changed based on gender theory or transgender identity.