Moderna Says its Vaccine is Highly Effective in Preventing COVID-19

The biotech company Moderna said Monday that its experimental vaccine is 94.5% effective in preventing the COVID-19 coronavirus, according to analysis of its clinical trial.

Final results are expected in as soon as a few weeks, and vaccines from both Moderna and Pfizer could be available on a limited basis by the end of the year.

Moderna Says its Vaccine is Highly Effective in Preventing COVID-19 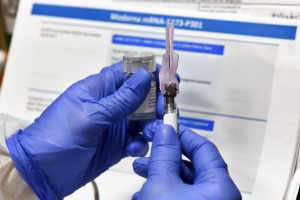 Moderna’s coronavirus vaccine was nearly 95% effective and thwarted severe disease in an interim analysis, the company said Monday, putting a second drugmaker on track to request emergency approval before the end of the year.

The Cambridge, Massachusetts, company said it counted 95 cases within its trial of 30,000 participants. Only five of them were in the vaccine arm of the trial, versus 90 in the placebo group.

It also looked at 11 severe cases of COVID-19 and found that all of those participants received the dummy shots, not the...

Read full story
See full media bias rating for Washington Times
From the Center
13320
Coronavirus
Moderna's candidate COVID-19 vaccine looks to protect 94.5% of those who get it, trial shows. 'This makes me giddy,' one doctor says.
USA TODAY

A second COVID-19 candidate vaccine looks to be even more effective than the first, with both protecting more than 90% of those who get the shots.

Moderna, a Cambridge, Massachusetts-based biotechnology company, announced early Monday that its candidate vaccine, mRNA-1273, developed in collaboration with the U.S. government, appears to be 94.5% effective against the disease.

Earlier this month, Pfizer and its German partner BioNTech, announced early effectiveness data, showing their vaccine, called BNT162b2, had protected more than 90% of those who received it.

Both results are preliminary, with final...

Biotechnology firm Moderna announced Monday that a preliminary analysis shows its experimental coronavirus vaccine is nearly 95 percent effective at preventing illness, including severe cases — a striking initial result that leaves the United States with the prospect that two coronavirus vaccines could be available on a limited basis by the end of the year.

The news comes a week after pharmaceutical giant Pfizer and its German partner BioNTech lifted the stock market and people’s hopes with the news that their coronavirus vaccine was more than 90 percent effective.

The US just marked 25 million Covid-19 cases. Now it's a race between vaccines and variants

It took just over a year for the US to go from one to 25 million coronavirus infections. That's an average of about 67,934 new infections every day, or an...

On Jan. 6, America watched in horror as insurrectionists attacked the Capitol. In real time, we followed the livestreamed video and images of angry mobs...

President Biden, seeking to assert leadership over the coronavirus pandemic, signed a string of executive orders and presidential directives on Thursday aimed...

Almost exactly one year after the first case of the coronavirus was detected in the United States, the country has now reached 25 million confirmed infections...

President Joe Biden has painted a bleak picture of the nation’s coronavirus outbreak in his first few days in office, warning that it will take months to turn...

The United States has surpassed 25 million confirmed cases of COVID-19 since the pandemic began. The new milestone, reported Sunday by Johns Hopkins...