The "Advancing American Freedom" group will enable Pence to maintain his political profile and serve as his vehicle to help defend Trump-era policies. It is likely to focus on issues such as immigration and border security, while opposing President Biden's infrastructure plan that raises corporate tax rates. 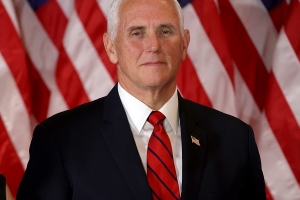 Former Vice President Mike Pence is re-emerging publicly with the launch of an advocacy group that combines traditional conservatism and the Make America Great Again movement.

Pence, perhaps with an eye on a 2024 presidential run, is chairman of Advancing American Freedom, which will seek to promote the Trump-Pence administration's accomplishments while building a "winning formula for a broader coalition," aides told the Washington Examiner.

Former President Donald Trump expressed support for Pence's venture in a statement to the Examiner.

"It was the most successful first term in American history,"...

Read full story
Some content from this outlet may be limited or behind a paywall.
See full media bias rating for Newsmax (News)
From the Left
1184
Politics
Pence, eyeing 2024 presidential bid, launches group to defend Trump-era policies from "liberal attacks and media distortions"
CBS News (Online)

Former Vice President Mike Pence is beginning to reemerge after the end of the Trump administration with the launch of a new group to counter the policies of the Biden administration and the Democratic-controlled Congress.

The former vice president has mostly kept out of public view since Inauguration Day, focusing mostly on some early work with conservative organizations and the arrival of a new grandchild. But on Wednesday, he launched Advancing American Freedom, an entity, he said in a statement, that would "promote the pro-freedom policies of the last four...

Former Vice President Mike Pence on Wednesday announced the creation of a new political advocacy group, his latest step to remain involved in the conservative movement as he plots out his political future.

“Advancing American Freedom plans to build on the success of the last four years by promoting traditional Conservative values and promoting the successful policies of the Trump Administration,” Pence said in a statement. "Conservatives will not stand idly...

Incendiary warnings by Democratic Rep. Maxine Waters about the potential outcome of the trial of the ex-police officer charged with killing George Floyd could...

In the last days of his life, former Vice President Walter Mondale received a steady stream of phone calls of appreciation. Former Presidents Jimmy Carter and...

Former Vice President Walter Mondale, who was also the Democratic nominee for president in 1984, died on Monday at the age of 93. Kathy Tunheim, a...

Ayanna Pressley Wants To Cancel the Rent. She's Also Made at Least $15,000 As a Landlord.
ANALYSIS

Rep. Ayanna Pressley (D–Mass.) wants to cancel the rent. She also is the owner of a rental property from which she and her husband have received tens of...

Walter Mondale, a Democratic vice president who was beaten by Ronald Reagan in a landslide presidential election in 1984, died at his home in Minneapolis on...

Hysteria, groupthink and a fair amount of hypocrisy are the key ingredients in a ­ruinous cocktail that has managed to intoxicate some formerly profit-focused...

Pelosi: Waters Should Not Apologize for Urging Protesters to ‘Get More Confrontational’

House Speaker Nancy Pelosi on Monday said she does not believe Representative Maxine Waters (D., Calif.) should apologize for her recent suggestion that...