With Sen. Joe Manchin (D-W.Va.) on board, Senate Democrats are close to passing the second half of President Joe Biden’s domestic agenda. The legislation’s fate now largely rests with Sen. Kyrsten Sinema (D-Ariz.), who remains undecided.

Democrats say their new deal aims to reduce the federal deficit and spend far less than the previous multi-trillion dollar Build Back Better bill, which Manchin and Sinema shot down. However, it was unclear on Monday whether Sinema would support the new bill’s tax proposals, including closing the carried interest tax loophole. Sinema is also reportedly open to allowing amendments from Republicans, who could try to prevent the bill’s passage with so-called “poison-pill” amendments.

Sinema is known for not negotiating publicly. A spokesperson told Fox News (Right bias) that Sinema was “reviewing the bill text and will need to see what comes out of the parliamentarian process.” Senate Parliamentarian Elizabeth MacDonough is set to review the bill for a budget reconciliation filibuster exemption later this week. If passed, the bill would serve as a major Democratic victory ahead of the 2022 elections.

Coverage was widespread across the spectrum, particularly in mainstream political outlets like Fox News and CNN (Left bias). Coverage from the right often framed the deal as a “spending” bill and focused more on Republicans’ criticisms. 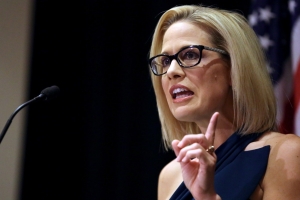 The fate of a social spending and tax bill agreed to by Sen. Joe Manchin and Senate Majority Leader Chuck Schumer hangs in the balance as another key moderate, Sen. Kyrsten Sinema still hasn't said if she'll support it.

Manchin, D-W.Va., said he plans to talk with Sinema, D-Ariz., on the Senate Monday about the bill. But her office says it may take a little longer for the senator to decide how she will vote.

"Sen. Sinema does not have comment as she’s reviewing the bill text and will need to see...

Sinema indicates she may want to change Schumer-Manchin deal
Axios 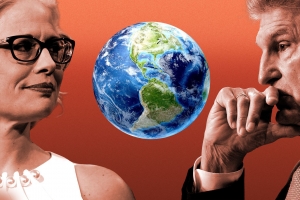 Sen. Kyrsten Sinema (D-Ariz.) had a message for her Democratic colleagues before she flew home to Arizona for the weekend: She's preserving her options.

Why it matters: Sinema has leverage and she knows it. Any potential modification to the Democrat's climate and deficit reduction package — like knocking out the $14 billion provision on carried interest — could cause the fragile deal to collapse.

Her posture is causing something between angst and fear in the Democratic caucus as senators wait for her to render a verdict on the secret deal announced by Senate...

Democrats this week have the chance to validate their monopoly on political power in Washington, create a legacy of true significance for President Joe Biden and even boost their hopes in daunting midterm elections in three months.

But first they must push a back-from-the-dead climate and health care initiative through the Senate using their tiny majority, notably by locking in the crucial vote of moderate Arizona Sen. Kyrsten Sinema, who has yet to sign off on a bill that may not save Democrats in November but may at least give them a big new win to...