How Will the US Respond if Russia Invades Ukraine?

President Joe Biden's administration has threatened sanctions against Russian officials and an end to the planned Nord Stream 2 gas pipeline from Russia to Germany if Russia invades Ukraine. On Wednesday, the White House approved a plan for U.S. troops based in Poland to aid the departure of thousands of Americans likely to leave Ukraine if Russia attacks. Deputy Treasury Secretary Wally Adeyemo recently said Russian President Vladimir Putin can "choose the path of diplomacy and dialogue or choose a path that leads to the Russian economy suffering not only for tomorrow, but suffering over the long term and limiting his ability to project power into the future." There are currently 150-300 U.S. troops stationed in Ukraine; U.S. officials say they lack an exact count of the number of U.S. citizens currently in Ukraine.

Voices across the spectrum analyzed how the U.S. could use economic sanctions to hurt Russia while not harming its own global economic status; many also addressed how sanctions haven't deterred Russia's current military buildup on the Ukrainian border. Some right-rated outlets and voices highlighted concerns about U.S. troops in Ukraine, and poll data that suggests the American public opposes U.S. military intervention in the country. Some voices highlighted Russian citizens who oppose the brewing conflict and framed them as having been unjustly demonized. 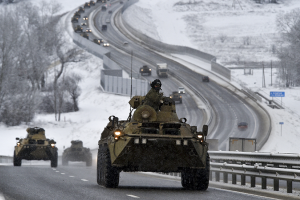 During an appearance on CBS’s “Face The Nation,” Adeyemo told host ​​Margaret Brennan that the sanctions would cut off elites from the markets they care about most.

Read full story
See full media bias rating for The Hill
From the Right
314
World
What happens to our troops in Ukraine if Russia invades?
Tucker Carlson 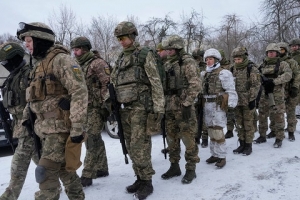 Joe Biden, you may recall, spent a lot of his time as vice president meddling in the internal affairs of Ukraine. And you may wonder, why Ukraine as opposed to say, Denmark or Senegal or any of the world's other 195 countries. Simple. Because the Ukrainians were paying Joe Biden's family a million dollars a year in exchange for the work that he did. And as president, you may have noticed, Biden has continued to represent Ukrainian interests. Most recently in their dispute with Russia.

Biden talks constantly about all the scary... 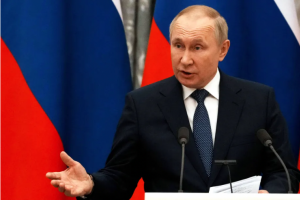 The United States has threatened to sanction Russia if it invades Ukraine.

But, what, exactly those sanctions might look like — and how punishing they might be — will depend not just on what Russia does, but on the costs the United States and its allies, especially in Europe, are prepared to withstand.

This is the dilemma facing the United States, which has ruled out deploying forces to Ukraine. The most aggressive sanctions, like making it extraordinarily difficult for Russian financial institutions and state-owned banks to trade in US dollars, could inflict a lot...