How Will Companies Be Able To Cover Abortion Travel Costs?

A number of U.S. companies have pledged to cover their employees' travel costs for out-of-state abortions. How feasible is the idea?

Amazon, Apple, Disney and Tesla are just a few of the corporate entities agreeing to cover travel costs for employees who live in states where abortions are widely restricted. Whether employees would fund their expenditures through a company's insurer or be directly reimbursed by the company itself is unclear. Some Big Tech companies such as Google are taking measures to protect women's personal data, but many other large companies have refrained from taken a strong public stance.

Corporations are generally self-insured, which means they pay for all claims and have more flexibility to decide what employee plans will cover. A third party then processes the claims on their behalf. While it's currently not against the law to travel to states where abortion is legal, there are efforts in some Republican-led states to change that.

Many progressive voices were supportive of these corporate pledges, but some also said companies shouldn't be involved in a "personal, private manner" and that this dilemma accentuates an underlying "troubling" trend where the public is becoming increasingly reliant on Corporate America to solve their problems "because the government will not." Some conservative voices emphasized how many pro-abortion companies in the U.S. are known for often "kowtowing" and having "booming business relations" with China, which is "notorious" for its modern human rights abuses. Some right-rated reports noted that Meta and other corporations have "banned" workers from discussing the Supreme Court's overturning of Roe v. Wade. 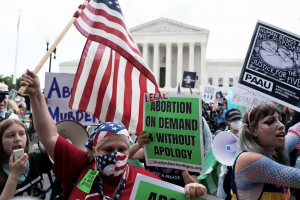 The US Supreme Court’s reversal of the constitutional right to an abortion has handed an instant challenge to business leaders, caught between their fear of reprisals for taking sides on a polarising topic and their employees’ dependence on company-issued health insurance.

“The ultimate result is chaos for employers that typically operate in multiple states,” given the expectation that many states will now pass sweeping abortion bans, said Jen Stark, co-director of the centre for business and social justice at BSR, which advises businesses on how to navigate their social responsibilities....

Read full story
Some content from this outlet may be limited or behind a paywall.
See full media bias rating for Financial Times
From the Right
280
Abortion
U.S. Companies Offering Abortion Benefits for 'Worker Rights' Are Complicit in China's Human Rights Abuses
Townhall 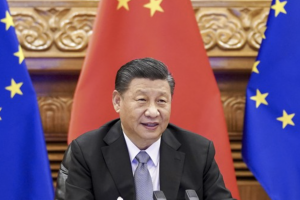 Rather than pay for maternity leave, a laundry list of woke U.S. corporations (who until recently flaunted Pride-themed logos) are cutting costs by offering chump change so their pregnant employees can travel across state lines to abort their babies. Just so the female laborer can get back to work on Monday and continue to slave away in the warehouse or clock in at her 6'x6' cubicle—all while the rich get richer. Hurray for women's empowerment?

Aside from the anti-family position, corporate America is painting the baby-killing procedure as "healthcare" and "a human...

Read full story
Some content from this outlet may be limited or behind a paywall.
See full media bias rating for Townhall
From the Left
280
Abortion
You shouldn’t have to ask your boss for an abortion
Vox 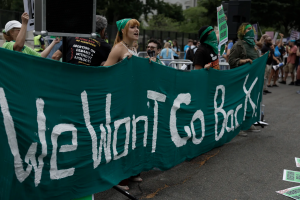 Companies stepping up to say that they will support their workers in accessing abortions after the Supreme Court’s decision to strike down Roe v. Wade raises questions both logistical and existential. For example, do you really want to ask your boss at Dick’s Sporting Goods for $4,000 and a couple of days off to terminate a pregnancy? If you start to think about the situation beyond the press release, it can get pretty disturbing pretty quickly. It reinforces how supremely screwed up the entire post-Roe situation is, as well as the setup of the United...