Rep. Michael McCaul (R-Texas) released a report on the COVID-19 pandemic's origins Monday, alleging that China concealed COVID-19's leak from the Wuhan Institute of Virology (WIV) in 2019. McCaul, the House Foreign Affairs Committee's ranking member, says China is guilty of the "greatest coverup of all time". Many health experts and scientists in the U.S. continue to stress that the theory that a Chinese laboratory leak set off the pandemic remains unlikely, though warrants further investigation. The House report states that "the preponderance of the evidence proves the virus did leak from the WIV and that it did so sometime before September 12, 2019." It highlights "the sudden removal of the WIV’s virus and sample database" on that date, as well as "unusually scheduled maintenance at the WIV," as evidence of the lab leak theory. The theory was dismissed as a conspiracy in early 2020 by many public health officials, Democratic leaders and mainstream media sources. 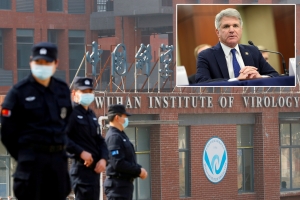 COVID-19 leaked from the controversial Wuhan lab sometime before Sept. 12, 2019 — with China’s Communist Party keeping the deadly virus under wraps in the “greatest coverup of all time,” according to a damning Republican investigation into the origins released Monday.

The report shows “a preponderance of the evidence proves that all roads lead” to the Wuhan Institute of Virology, the bat-research lab already eyed as a source for the pandemic, according to Rep. Michael McCaul.

“It is our belief the virus leaked sometime in late August or early September 2019,” said McCaul, the lead Republican... 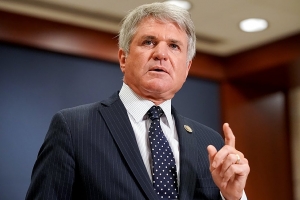 A House Republican lawmaker’s investigation into the origins of COVID-19 is raising concerns that the pandemic outbreak stemmed from a genetically modified virus that leaked from the Wuhan Institute of Virology, located in the Chinese city where the virus was first detected in December 2019.

Rep. Michael McCaul (R-Texas), the ranking member of the House Foreign Affairs Committee, released on Monday a third installment in his investigation into the origins of the virus and the missteps by China in alerting the world to the risks of the pandemic.

The GOP investigation parallels efforts by the... 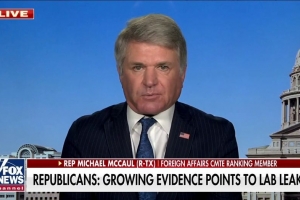 Rep. Michael McCaul, R-Texas, shared new findings from the House Foreign Affairs Committee Republicans' probe into the possible origins of COVID-19 on Monday and accused the Chinese Communist Party (CCP) of engaging in the "greatest cover-up in human history."

The committee's ranking Republican, during an appearance on "America’s Newsroom," laid out a number of key points from the report and asserted that the CCP is likely "very concerned" by its findings.

"They were playing with fire," said McCaul. "They were genetically manipulating at the lab this gain-of-function that was taking place."

Many of the key points from the...

Proof of COVID-19 vaccination will be required at indoor bars, wineries, breweries, nightclubs and lounges in Los Angeles County under a forthcoming health...

Local health departments planning for potential Covid-19 booster rollout, but there is still '...

It's not clear if or when boosters doses of Covid-19 vaccines will be OK'd for fully vaccinated people in the United States, but state and local health...

When Joe Biden announced sweeping federal coronavirus vaccine requirements for 100 million Americans, the White House was braced for objections from...

COVID cases are falling, but deaths are rising

The pace of new coronavirus infections in the U.S. is beginning to slow — a potential sign that the states hit hardest by the Delta wave may be starting to...

Florida Governor Ron DeSantis has continued to criticize President Joe Biden as they continue to disagree in how to deal with the ongoing...

More Americans now disagree (41%) than agree (32%) that the Centers for Disease Control and Prevention (CDC) has communicated a clear plan of action in...

Republican Wisconsin Sen. Ron Johnson is requesting information about the Biden administration’s vaccine guidance for individuals who have received some form...

Los Angeles County, the most populous county in the United States, announced Wednesday it would require proof of COVID-19 vaccination at bars,...

President Biden on Wednesday met with some of the top business leaders in the country, including the CEOs of Microsoft, Walt Disney and Walgreens, days...

'COVID-19 Hospitalizations' Are an Increasingly Misleading Measure of Severe Disease

Since the beginning of the COVID-19 pandemic, researchers, policy makers, and journalists have viewed hospitalizations as an important indicator of the disease...