Former WH Aide Says Trump Wanted to Go to the Capitol on Jan. 6, Was Aware Protesters Were Armed

Hutchinson, 26, detailed conversations she had leading up to Jan. 6 with Meadows and Trump lawyer Rudy Giuliani. Hutchinson said Giuliani told her on Jan. 2 that Jan. 6 would see Trump at the Capitol with members of Congress. She said Meadows later told her that “things might get real, real bad” on Jan. 6.

Hutchinson said Trump was aware that his supporters were armed when they attended his Jan. 6 rally, but he insisted on letting them in because “they’re not here to hurt me.” Hutchinson also said she was told Trump wanted to go to the Capitol, but when staff said it wasn't possible, Trump lunged at a secret service agent and tried to grab the presidential vehicle's steering wheel. After a brief recess, Hutchinson described efforts to get Trump to release a statement in the riot's aftermath. Following Hutchinson's testimony, Rep. Liz Cheney (R-Wyo.) revealed evidence of possible intimidation of Jan. 6 witnesses. Trump responded to Hutchinson's testimony on Truth Social, writing that "I hardly know who this person, Cassidy Hutchinson, is, other than I heard very negative things about her (a total phony and ‘leaker’)."

Coverage was prominently featured across the spectrum on Tuesday, often including sensational language like “bombshell” and “attacked.” As with previous hearings, CNN (Left bias) stood out by including the tagline, “Attack on Democracy.” Update 7/1/22: Hutchinson is 26 years old, not 25; several outlets inaccurately reported that Hutchinson was 25 the day of the hearing. 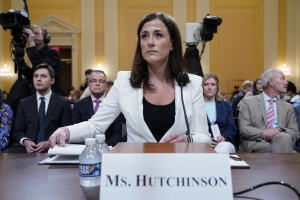 Cassidy Hutchinson, a key aide in Donald Trump’s White House, told the House committee investigating the violent Jan. 6, 2021, insurrection on Tuesday that Trump was informed that people rallying on the mall that morning had weapons but he told officials to “let my people in” and march to the Capitol.

Hutchinson quoted Trump as directing his staff, in profane terms, to take away the magnetometers that he thought would slow down supporters who’d gathered in Washington. In videotaped testimony played before the committee, she recalled the former president saying... 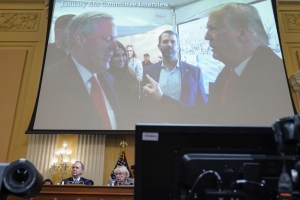 Former President Donald Trump dismissed the ex-White House aide who testified before the Jan. 6 committee on Tuesday as a leaker and a ‘phony’ whom he denied a job after his presidency ended.

Mr. Trump said Cassidy Hutchinson, who served under former Chief of Staff Mark Meadows, requested to join others from the president’s team in Florida after he left office, but he rejected her.

“Why did she want to go with us if she felt we were so terrible?” Mr. Trump wrote on Truth Social. “I understand that she...

Read full story
Some content from this outlet may be limited or behind a paywall.
See full media bias rating for Washington Times
From the Center
12553
Donald Trump
Hutchinson says Trump knew Jan. 6 attendees had weapons: ‘They’re not here to hurt me’
The Hill

Ex-White House aide Cassidy Hutchinson on Tuesday testified that former President Trump and his former chief of staff Mark Meadows were both told attendees at a Jan. 6, 2021, rally had weapons, and that Trump was frustrated that those with weapons were turned away.

Hutchinson, a former top aide to Meadows, told the House committee investigating the Jan. 6 riots that Trump was “furious” that the Ellipse near the White House had not filled up to capacity for a rally on the morning of the Electoral College certification.

News
Pence: 'I would consider' testifying to Jan. 6 committee
Politico

Opinion
Trump Is Back on the Ballot
The Atlantic

Opinion
Would the GOP Nominate an Indicted Trump?
The Bulwark